Part of travel is dealing with the occasional, in-between, “not-quite-there-yet” blahs. Though I hesitate to write anything that isn’t positive or at least somewhat entertaining, it’s realistic to expect to have some of these moments woven in. Now is one such moment. We are in Guayaquil for this next 24 hours, essentially killing time before we board a plane to Quito. None of us has anything personally against this sprawling city per se… it’s just… stinking hot, crowded and noisy; and we’ve pretty much already explored all the good stuff.

But let’s reflect on yesterday! Some fairly cool things transpired, reminding me that there are no accidents in life. In other words, the age-old “everything happens for a reason” is definitely true. It started at lunch time yesterday. If you recall, we were staying at a resort in the town of Playas. Everyone was stoked for another day at the beach/pool and as tummies started to rumble, I attempted to order some food for the girls. We are dealing with one very picky eater and another who cannot have dairy or eggs. I was all set to just order the picky one an $8 hot dog and the semi-picky one a $10 burger (I know, kill me now), when I was informed that for the second day in a row, they had no burgers and no hot dogs. Nor did they have any chicken left. In fact, all they had was seafood and this didn’t go over all that well with the young troops. (And in fairness, for the price we were paying to stay there, and given that we were nowhere near town, there should have been many other food options available!) Alas, we put our heads together and decided to take a taxi into the main town of Playas to look for a place to chow down there. Alvi also wanted to avail himself of a haircut, so off we went.

Our taxi driver, Dario, was ever so lovely! He asked if we wanted him to recommend a restaurant for us and we said, somewhat hesitantly, “sure!” Before long, we took a few twists and turns and seemed to go deeper into the residential area of Playas. My heart lurched forward as he turned into this place that looked like a warehouse of sorts, only even more “dive-y”. We decided to trust him and be good sports about it, and asked for him to return in one hour. Well, if it weren’t for Dario we would not have met the infamous Juan Ostras ~ an engaging fisherman with 40+ years experience and running what must be, quite frankly, the best restaurant in town. Forgive the constant string of cliches, you’ve heard this one many times before: don’t judge a book by its cover. Indeed, one shouldn’t. The food was outstanding! We ALL wound up having seafood — including Saffy — and gave rave reviews to this quirky and warm restauranteur. On the wall we noticed monetary bills from every country imaginable, yet strangely, Canada was missing. Alvi happened to have a fiver on him and that’s when I saw sheer joy in action: Alvi, thrilled to provide the missing bill, Juan, over the moon to have another notch on his gastronomical belt. They were fauning all over each other, it was totes adorable! 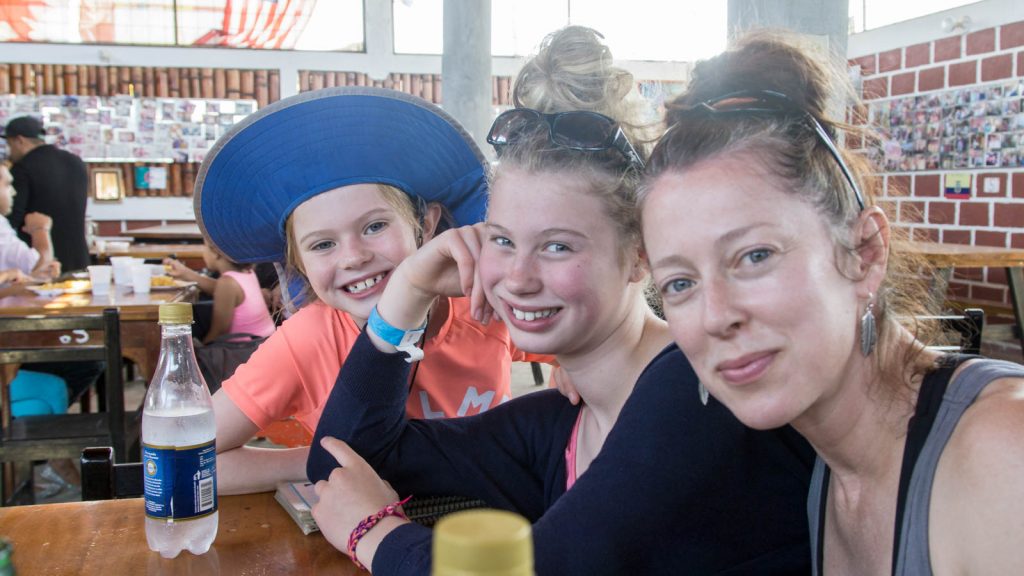 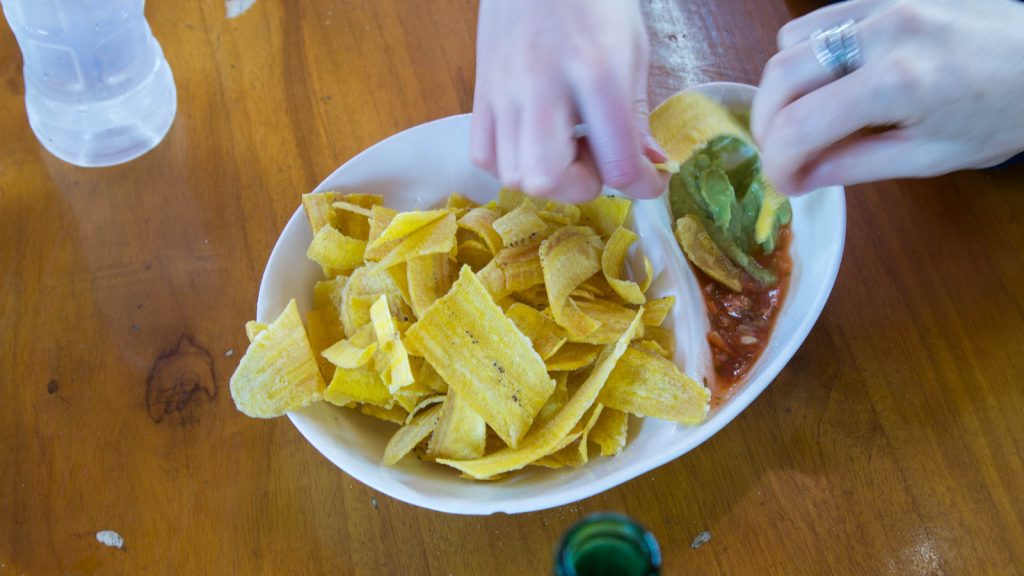 Plantain chips and salsa. Devoured. Even by the finicky Saffy. 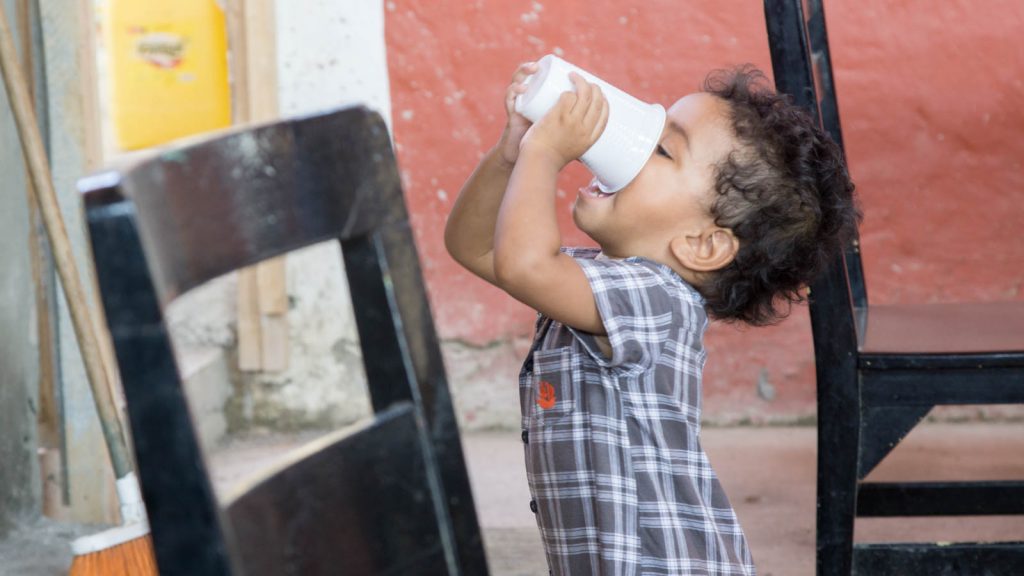 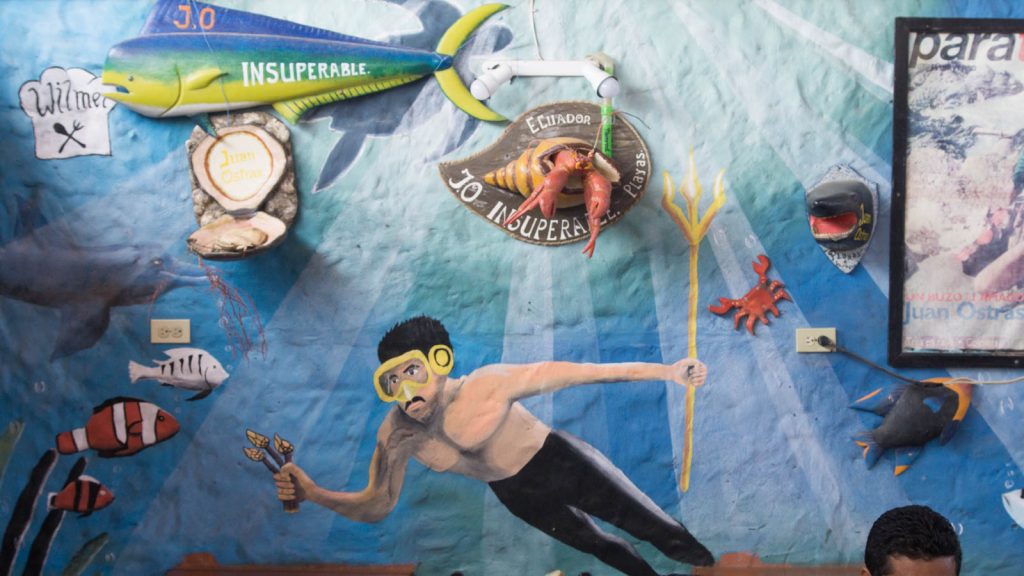 One of the walls inside this neato restaurant. 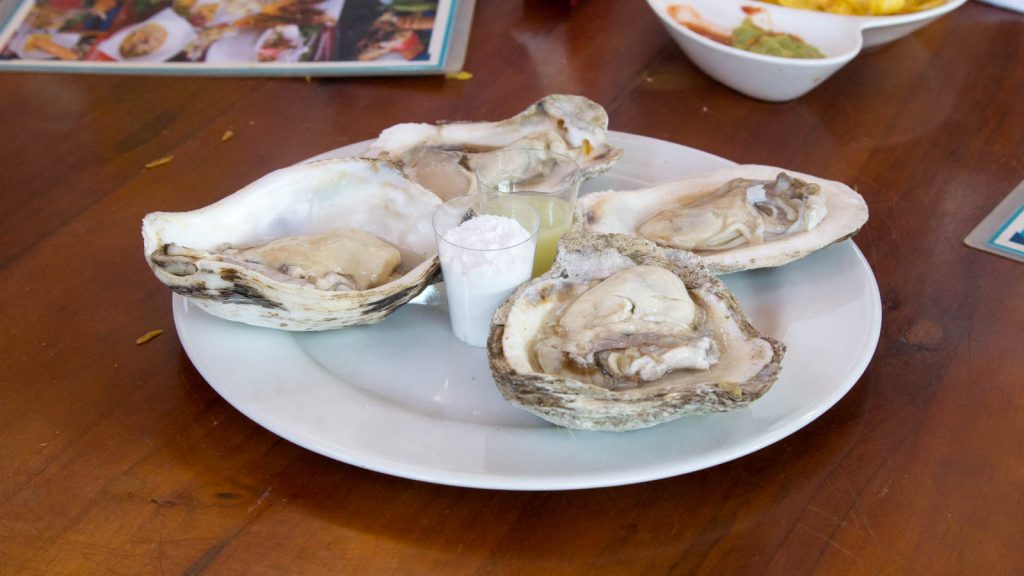 Oh, one other thing. Despite the run-down looking appearance on the outside of this restaurant, the bathrooms got five stars from us (1) they were clean (2) they had abundant amounts of toilet paper (3) the soap dispenser actually had soap! (4) they had doors that locked (5) they had mirrors (Piper liked this one the most). So again, never judge a book by its cover, people!

With food in our bellies, we hitched a ride to “The Mall” with Dario. It was ever-so-odd that a large, North American-styled mall would be built in the middle of a town with 4,000 inhabitants. To boot, it had the most random of stores for us to peruse. If we had been in the market for a new mattress, some candy, cell phone covers, some bras, school bags or groceries, it would have hit on all the right buttons! To Alvi’s relief, there was a Peluqueria where he scored a $4 haircut while the girls and I made faces at him. 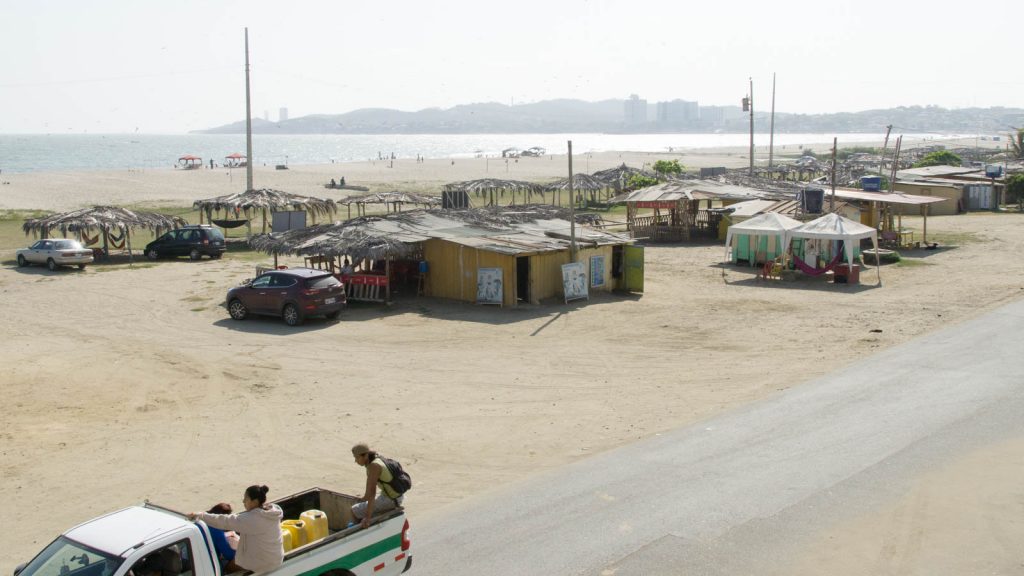 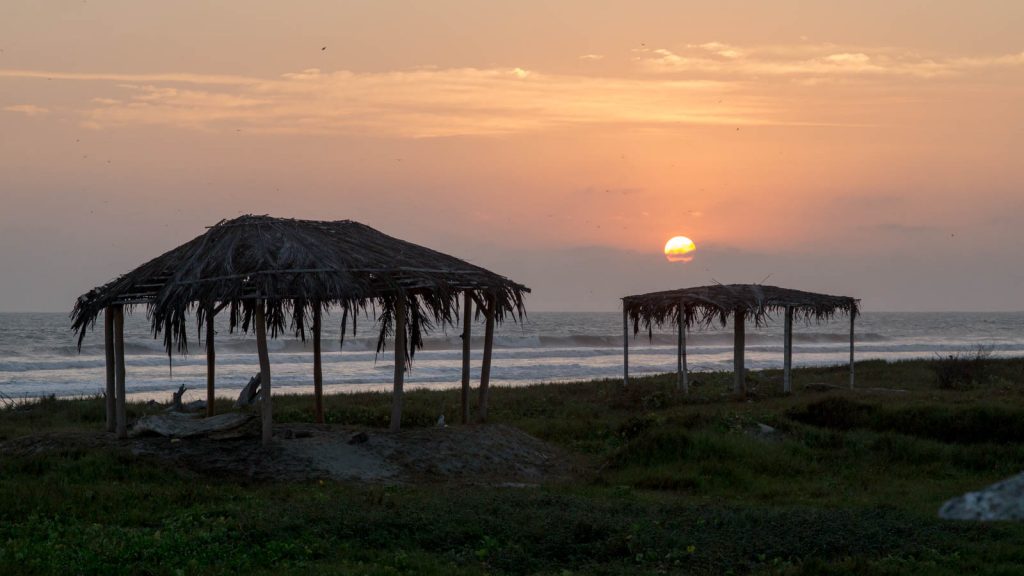 The rest of our day consisted of some typical Plavins-style activities, including me having to keep a pinky promise I had made to Saffy (had to suck it up and go swimming in the freezing cold pool) and later watching Pretty Little Liars with Piper, so I could finally understand why the wifi was of such deep concern to her. For dinner we made sandwiches while I simultaneously applauded our genius, money-saving skills.

So there you have it; nothing TOO exciting, but there is a bit more I’ll share. Remember what a fan I was of Dario’s? Yeah, well, not for much longer. As it turns out, we had made a deal with him take us back to Guayaquil in his taxi for $40. Given that I was initially told to expect a fare of $150, we jumped all over his offer. However, he very quickly left my good graces earlier today when I held on for literal dear life as he drove like a complete maniac back to the big city. The seat belts in the backseat, which is where Saffy, Piper and I sat, did not work. I was terrified. He would take corners going at least 120km and the passing lane lines meant zero to him. I could tell Alvi knew I was miffed and also beside myself. He kept looking back at me from the front seat and rubbing my knee. It was the longest hour of my life. I’m angry at myself for not speaking up… at least two or three times he had to slam on his brakes. Typical Canadian. Typical Sam. Don’t make waves. Be polite. I will NEVER do that again ~ that is, not speak up, when feeling vulnerable or afraid. It was totally ridiculous how reckless he was driving.

And now here we are back in Guayaquil… 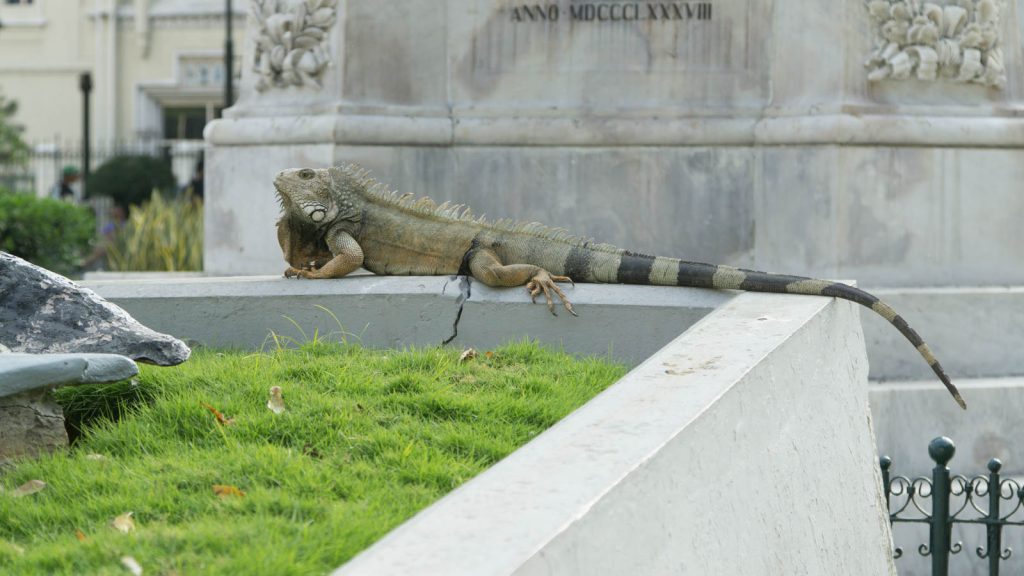 These guys again. Remember them from literally 50 days ago? This is THEIR park. 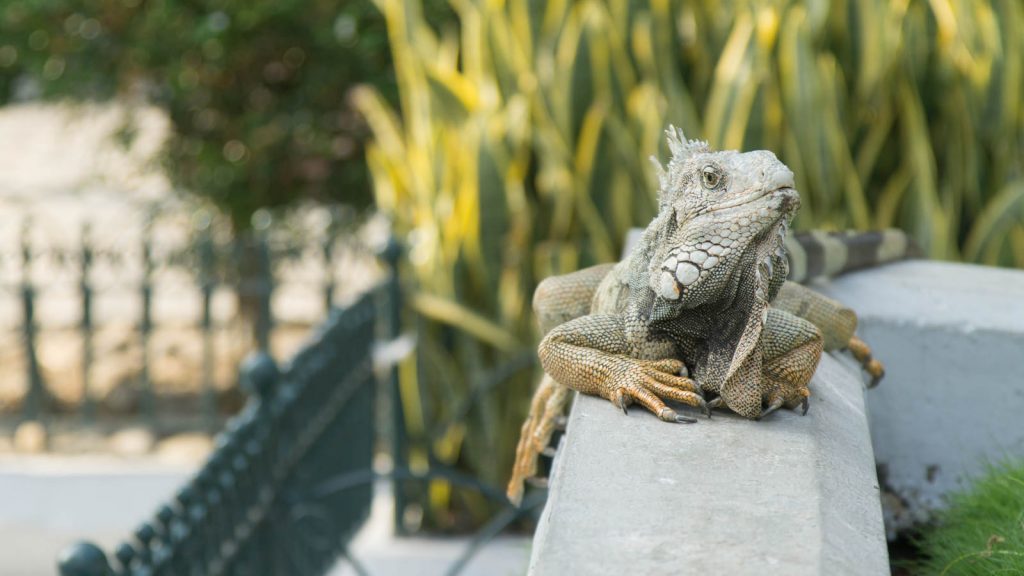 Saffy wanted him to come to Quito with us. 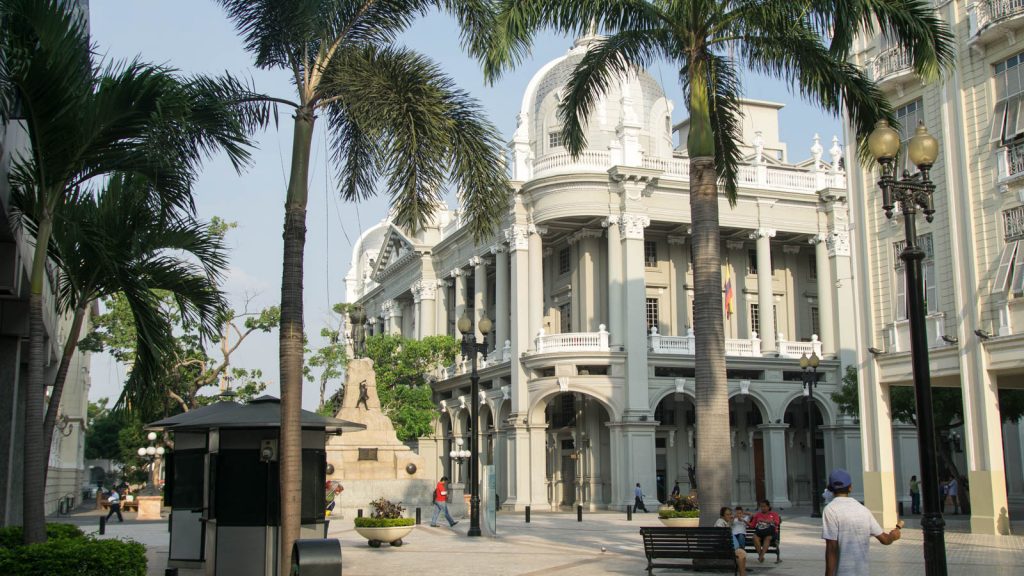 Some beautiful parts of Guayaquil we had not seen before. 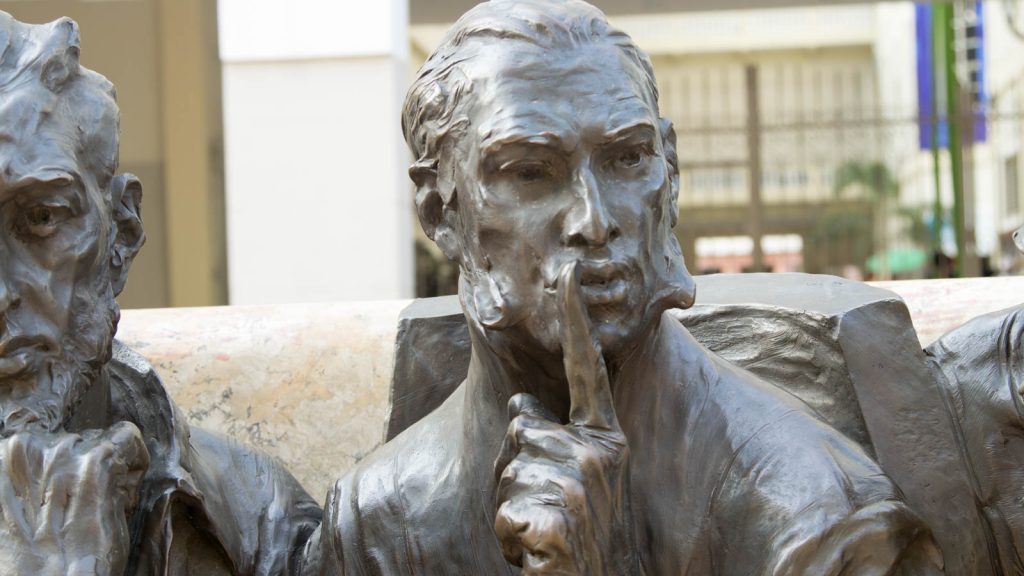 Shhh! Keep it down, you rowdy Canadians!!! 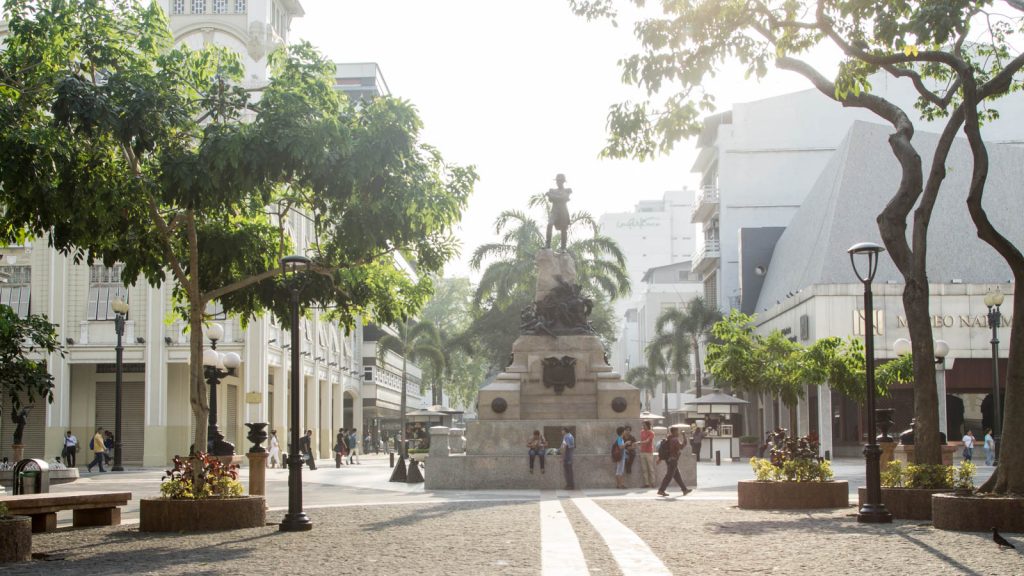 Very pretty part of this city. 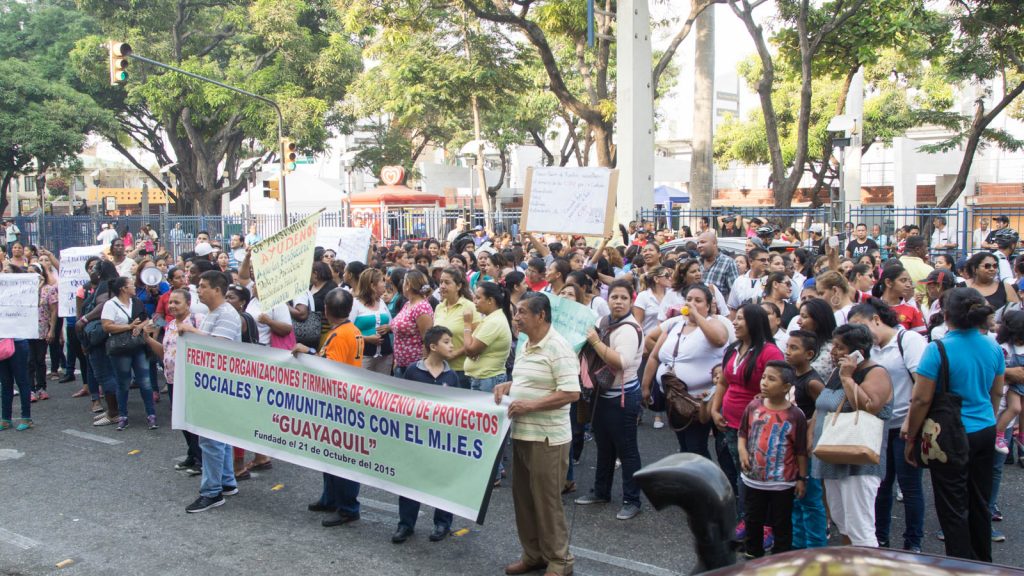 Ran into a protest while trying to cross the street. The kids learned what it means to Stand Up For What You Believe In. 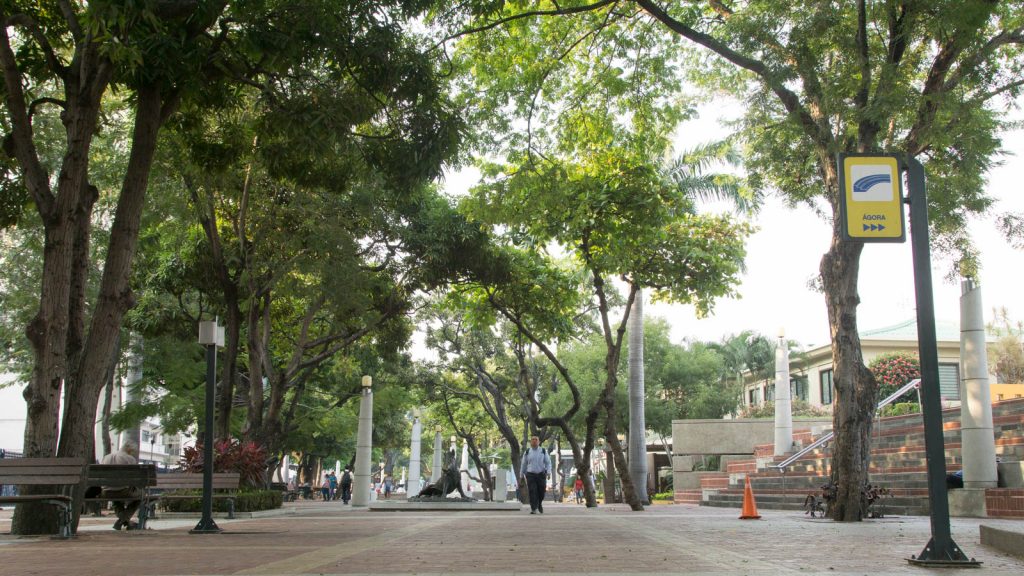 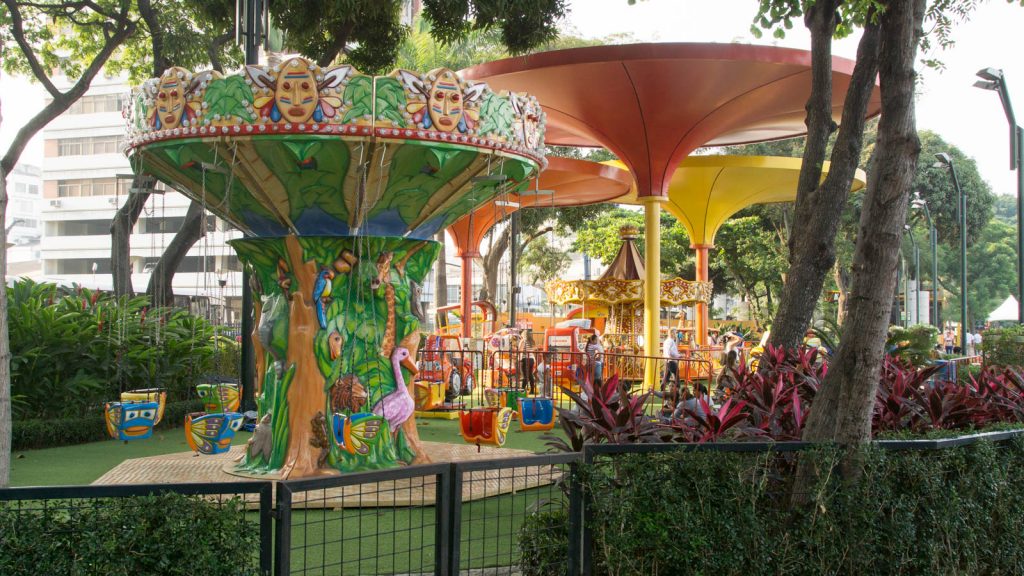 Really designed for families. Love it, even the second time around. 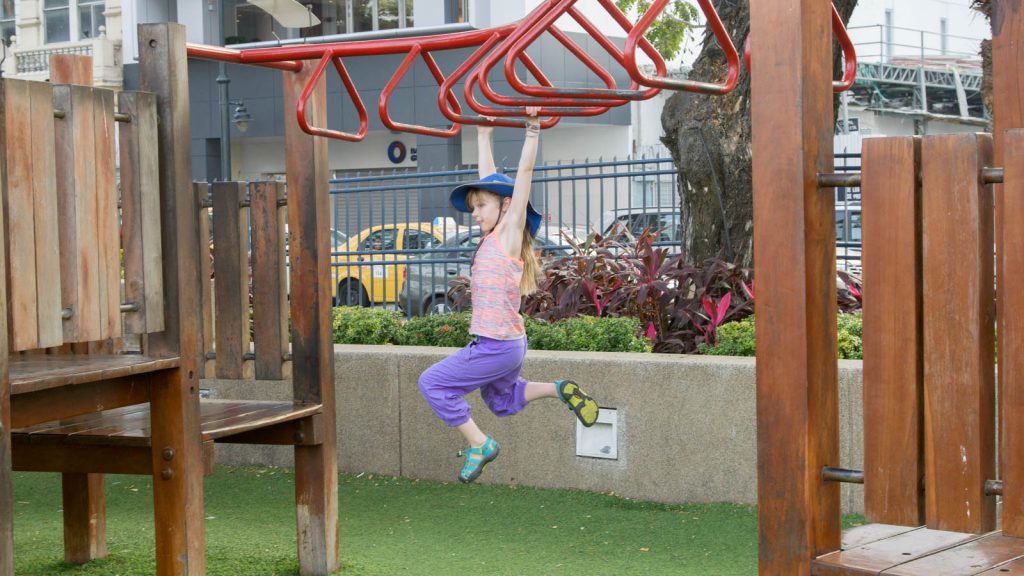 Saffy getting some monkey bar action in. 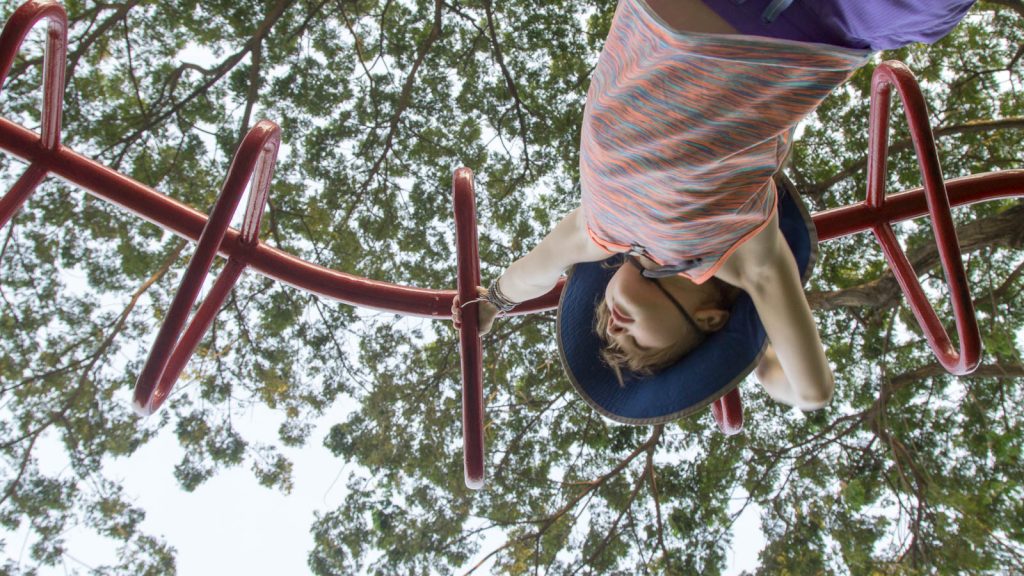 She’s a climber! (But not a walker, lol) 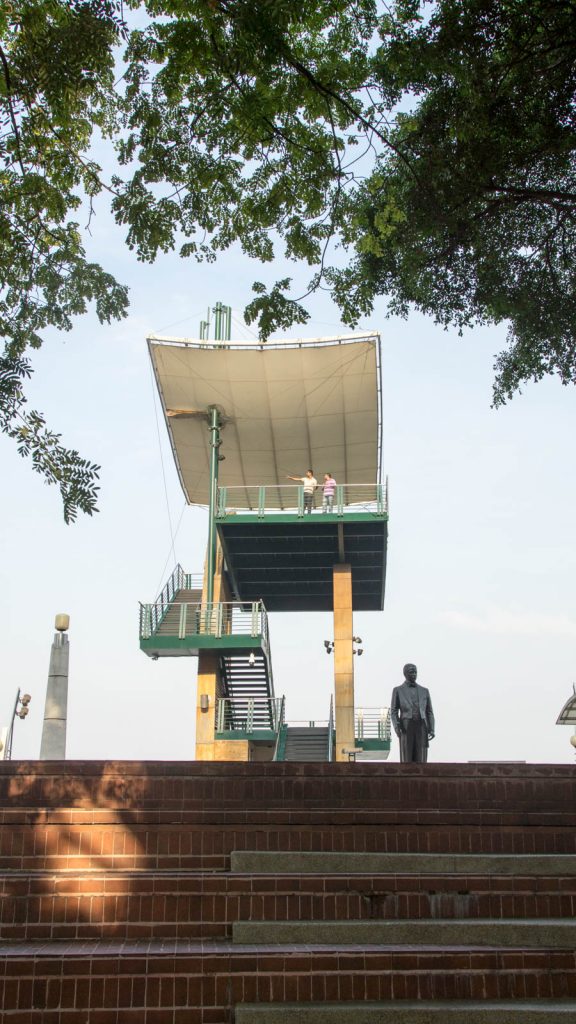 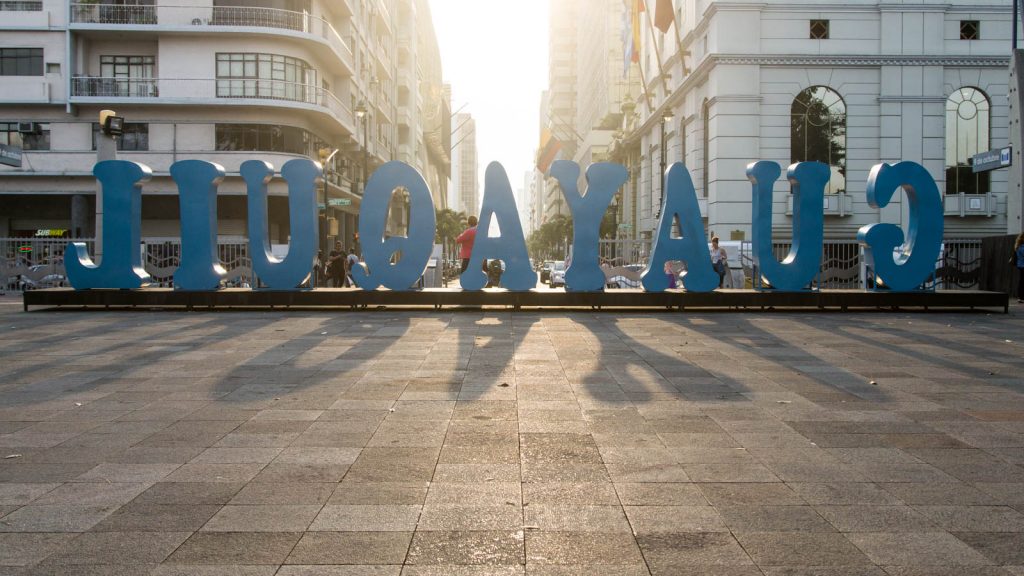 They had painted this sign since we were last here. 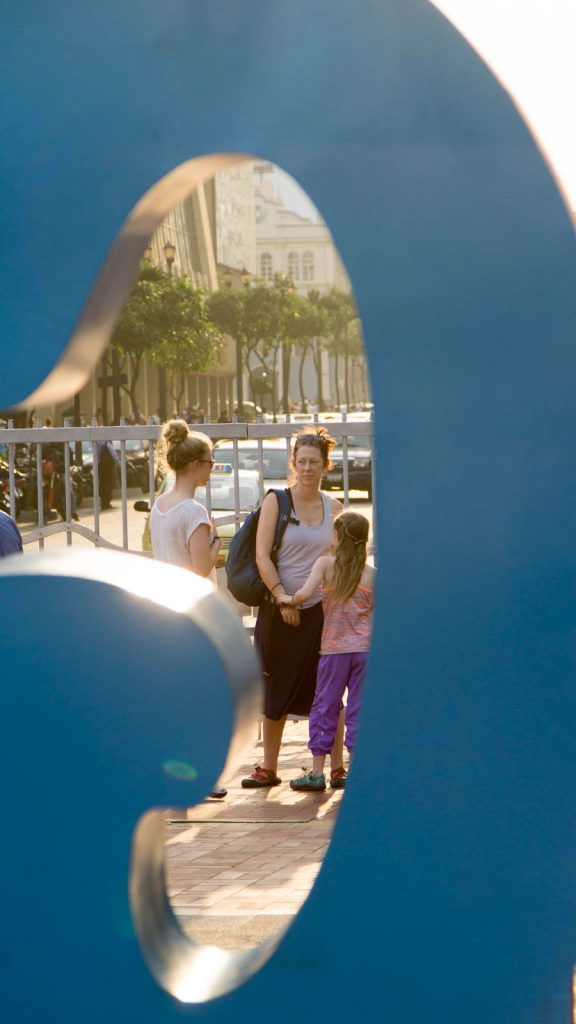 Anxiously awaiting the return to our hostel. Our dogs were tired.

I’ll end this post with an observation. The closer we get to being at the end of our journey, the more I want to just get home. Of the many things long-term travel has taught me, at the top of the list is most certainly an appreciation for what we have waiting for us on the other side. Family and friends who mean the world. Water that we can drink straight from the taps. People who speak our language. I hope this doesn’t come across as whiny or ungrateful, it’s just the inevitable pull for home starting to sink back in. We have fallen in love with so much of what we have seen and done, and would in fact consider living in Ecuador one day in the far future. And yet, there’s just no place like home. (Hey, you had to know I would throw in one more…. ) 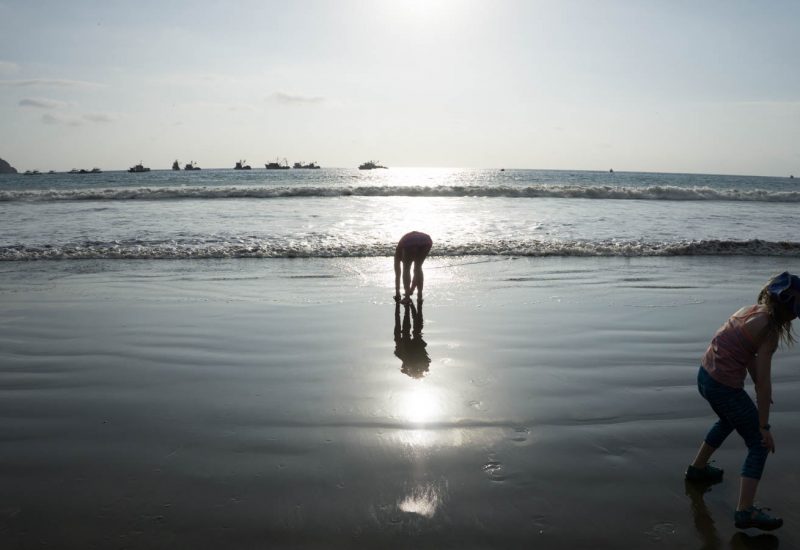 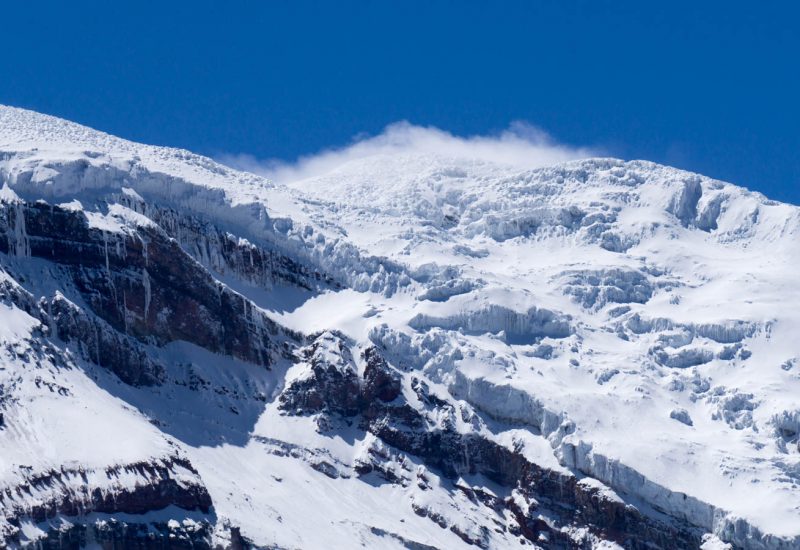 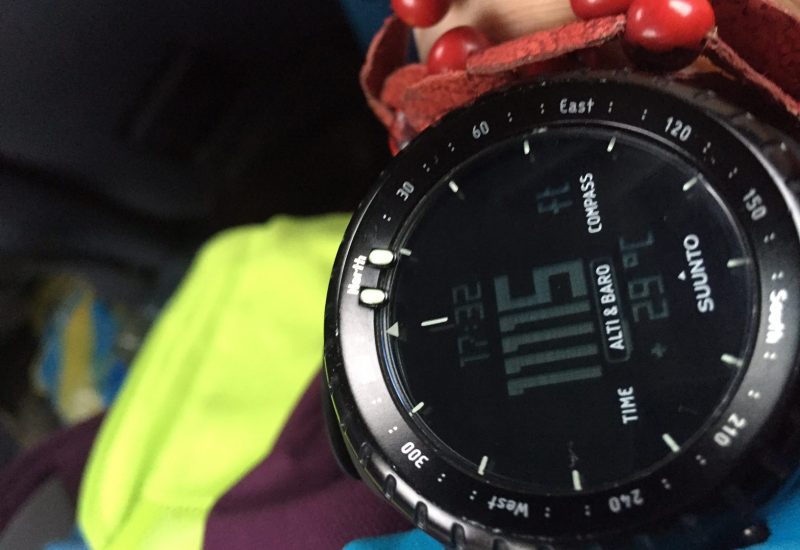