Day 25-26 (aka minor growing pains in the Sacred Valley)

You were pretty tough to take… but let’s start with the positives! We left Lima on Wednesday and flew to the high altitude city of Cusco, or Cuzco depending on your preference (still cannot figure this one out). Everyone’s spirits were high given that we had rented an old farmhouse in the Sacred Valley and were going to be given the chance to unpack, cook for ourselves and essentially “play house” for 11 days. The flight itself was uneventful other than some nasty turbulence over the Andes… for a brief moment I thought of those Chilean soccer players whose plane went down in the mountains decades ago; I wondered which of us would be eaten first. Definitely Alvi, his thighs would make a mighty meal! (Not calling you fat, my dear husband.) 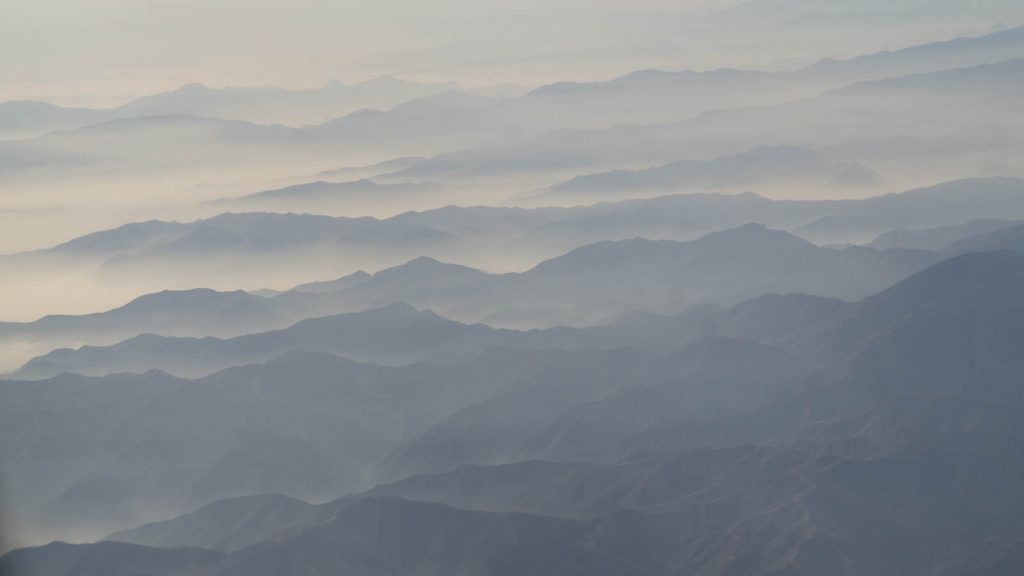 Leaving the coast and getting up into the mountains. Breathtaking. 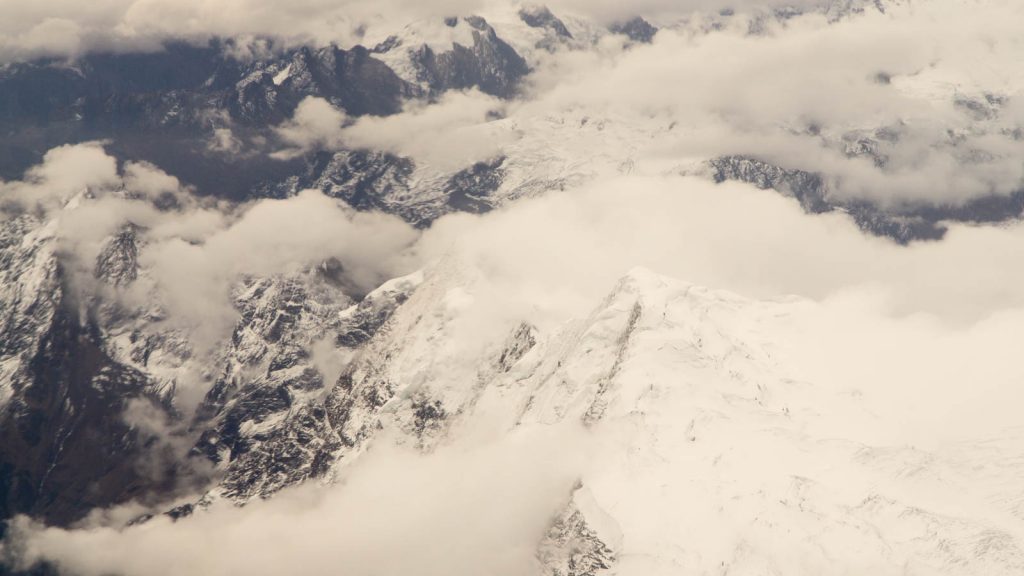 Flying over the Andes. Fingers crossed for safe landing!

On arrival we could feel the altitude difference ~ the air was dry and crisp (in Cusco the altitude ranges from 11,200 – 12,500 feet depending on where you are in the city). We had pre-arranged through the owners of our house to be picked up at the airport by “Freddy”. Sure enough, he was there ~ all smiles and warm greetings. So far so good! Our priority was to try and get Alvi to a doctor since we had come to the realization that some meds he was taking for his gastro bug were precisely NOT what he should be combining with his warfarin for his heart. This was an alarming discovery and had me quite panicked. Freddy took us to a clinic and waited in the car. The experience was not all that great there… we felt rushed and under pressure so decided to forego it altogether, picked up some rehydration liquids and agreed to await further instructions from his doctors in Canada.

Next on the list was picking up some grocery before heading to slightly lower elevation 1.5 hours away in the Sacred Valley. This went fairly smoothly with the “divide and conquer” strategy. The things we stumbled on were milk and coffee. Was this strange tetra pack really milk? Was it the right milk? Why was it not in the fridge? What was the difference between this one and that one (there were literally 20 different kinds)? And the coffee…. did it need to be ground? Was it instant? Nonetheless, our guesswork wound up paying off at the end of the day. Finding peanut butter for Saffy was a bust, but $130 US later we were on our way! I was feeling woozy at said Tienda and dying to just get to our place some 2,500 feet lower.

Over the hills, around some deep valleys and through some bum-clenching turns, we made it to our new home. The beautiful Liz was waiting for us with her 10-month old daughter on her back and her adorable little 2 year-old at her side. By this time it was dark and freezing. First impressions of the place we had rented were: Wow. This is rustic! And, how cool that this is so rustic!! All the rooms were compartmentalized, meaning you had to go outside to get to the next one. The three bedrooms were up some stone steps and the beds had thick, alpaca wool blankets weighing about 15 lbs each. There was no TV (grateful for this) and no heat. But all in all we had the basics for a fantastic week and a half! A fairly stocked quaint kitchen and a bathroom around the back of the house rounded out the place. Liz and her family lived right next door and were just a knock away to assist us as we got our bearings.

This first night was actually pretty good; Alvi cooked up a fantastic spaghetti dinner and I revelled as Saffy inhaled it. Hurray for putting meat back on her bones!! She also made friends with a neighbourhood cat that insisted snuggled on her lap for a few hours. We all eventually passed out early wondering what the days ahead would bring. 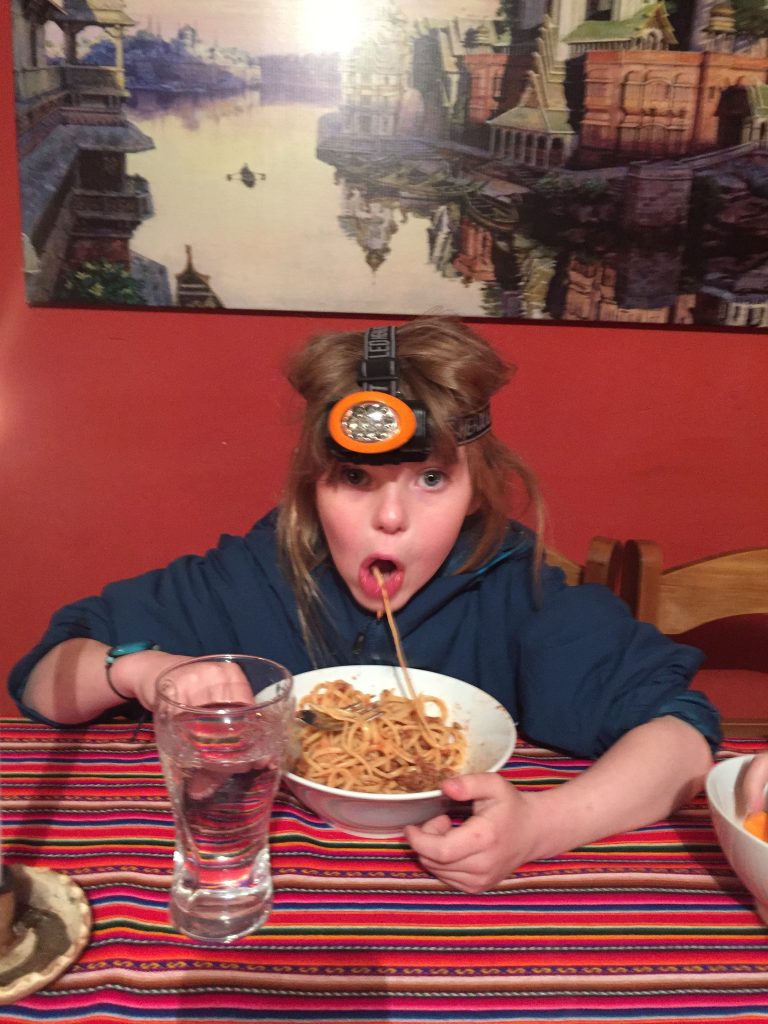 Not a very clear picture ~ taken from my iPhone, but love our goofy girl inhaling her spaghetti! 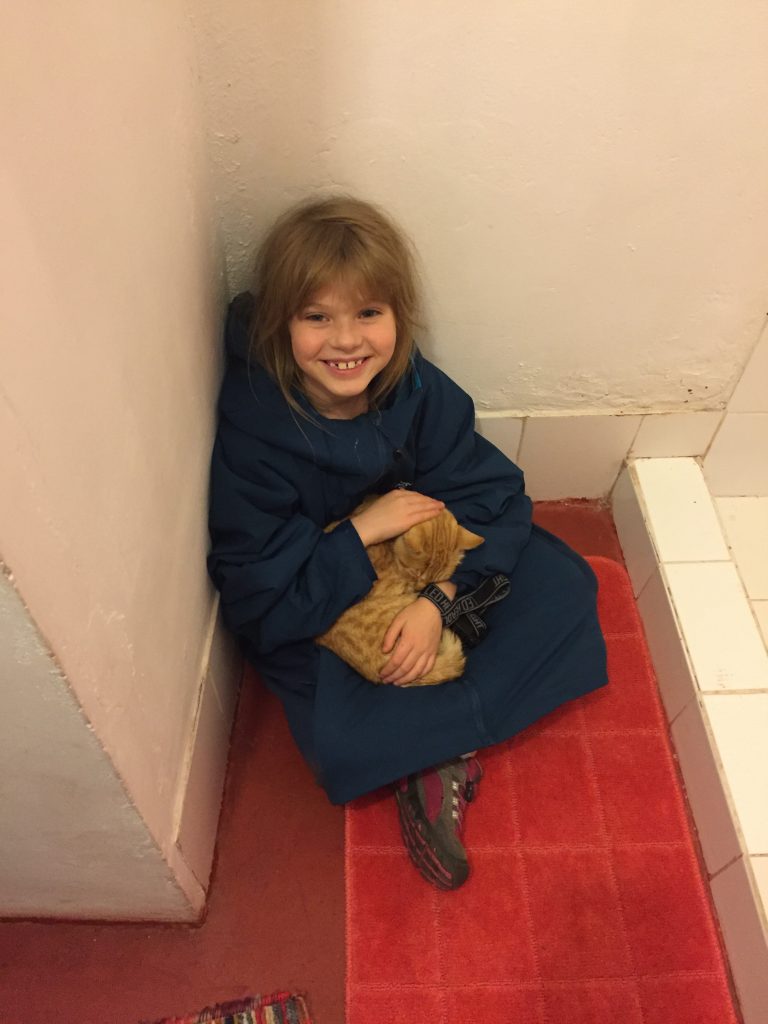 Saffy waiting to brush her teeth with the little cat all snuggled in.

Well, half of us awoke feeling sick with the altitude: me and Piper. Dagnammit!!! She nearly passed out in the kitchen making pancakes with her Dad, and I was doing all I could with the whole “mind over matter” trick to not let the dizzy feeling get to me. 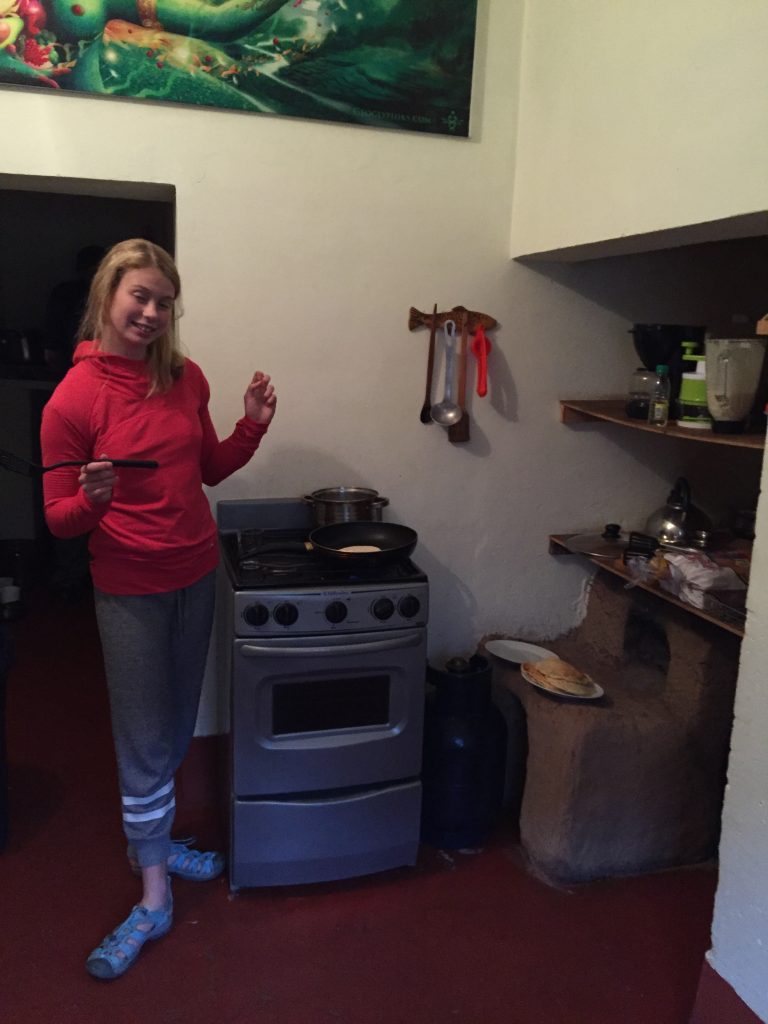 Piper making pancakes prior to nearly passing out. 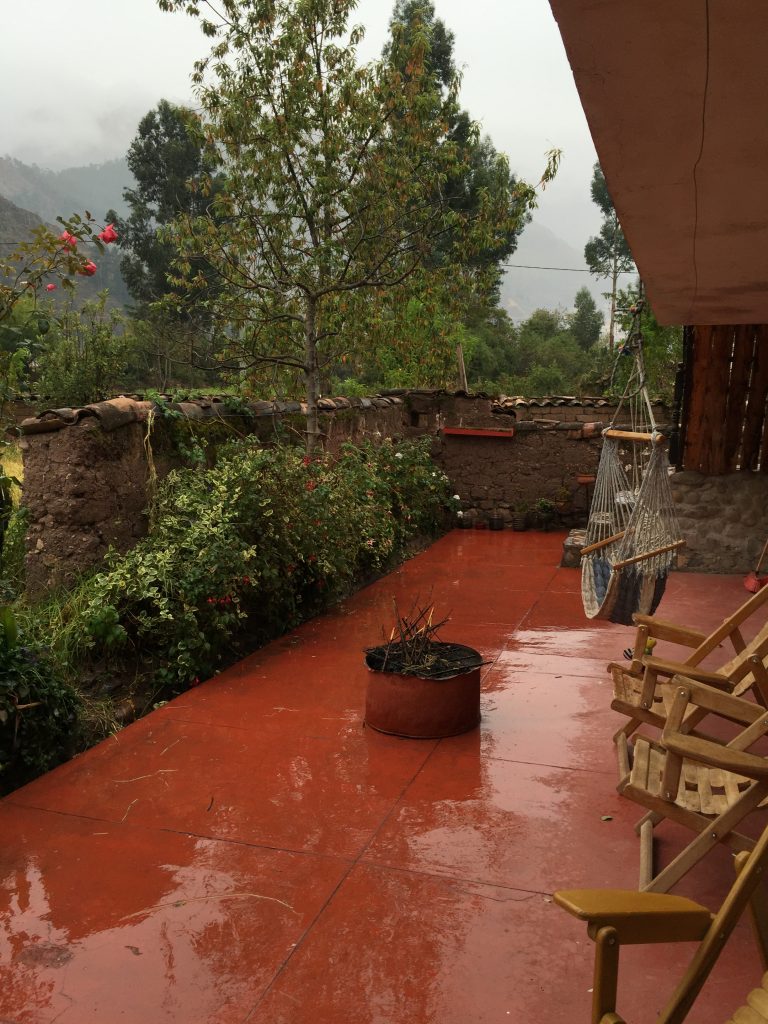 Our beautiful but rainy balcony.

Adding to this frustration was the fact that it was pouring with rain and freezing cold. In a nutshell, I had a total meltdown and wanted to come home. Said meltdown was filmed by resident videographer, Saffy, and shall be kept tucked away in the vault for posterity purposes. If ever there was a control freak, it was me. And talk about feeling out of control… I had no clue where in the Sacred Valley we were. Everything looked the same: adorable farmhouses, little stores on the side of the road, cows in seemingly endless fields. We were left to our own devices and feeling crummy. I wondered if I had made a huge mistake in bringing our family here, and, in going away for so long. I’m so used to having everything planned out and running at a million miles an hour, that the thought of having potentially nothing to do ~ or at least, not yet figured out ~ just terrified me. The kids were starting to climb the walls, Alvi had this nasty bug and I was worried about him managing his blood levels with the meds he was on. What were we going to do for the next 11 days and what if the sun never came out? These were all “pity-party” thoughts but I’m confessing them up front since I know there is video proof somewhere. I’m used to being the strong one and felt vulnerable… completely out of my element. When you physically feel unwell, and your tribe feels unwell, and it’s cold and rainy and you have no clue where you are ~ it’s…. disconcerting.

NEVERTHELESS, we shall persevere! They can’t all be good times with whales breaching and zip-lines and fresh-fruit smoothies! At some point, I picked myself up and went into channeling my inner Mike Wrenshall mode. This meant that we were going to make the best of it no matter what! I taught the girls how to play cribbage and Piper walloped Saffy and I. We attempted to download some music and a movie and were medium-successful given the speed and spottiness of the wifi. Later on, I continued channelling my inner Mike and decided that going outside ~ despite the rain and cold ~ would do me some good. I tried to convince any of the others and nobody moved from the goodness of the alpaca blankets (incidentally, there is no fireplace here, either, and to put it into perspective, the temperature might have been 5 or 6 degrees with solid down pouring of rain).

The walk along the highway was more to convince myself that I could re-assemble some degree of control: figure out where we were and get our bearings. I struggled walking along the highway, feeling stoned and woozy but pushing myself to keep going. I was looking for a sign, a road sign, people! Anything that would tell us where we were specifically. Having spoken to Liz and her husband Alex (who was away), I did know that the town of Urubamba was about 15 minutes away by bus. But I wanted more specifics! After passing by some random pigs, sheep, cows, dogs, horses, chickens and school children, I came across a sign that said “Sillacancha”. This must be the name of our village!!!! Feeling victorious with this small tidbit of information, I returned my soggy self back to our house, reminding myself to turn at the FOUR COWS/HALF-BUILT TIENDA.

Eventually, it cleared up, and as the fog lifted we could for the first time appreciate the sheer beauty of this placed called the Sacred Valley. 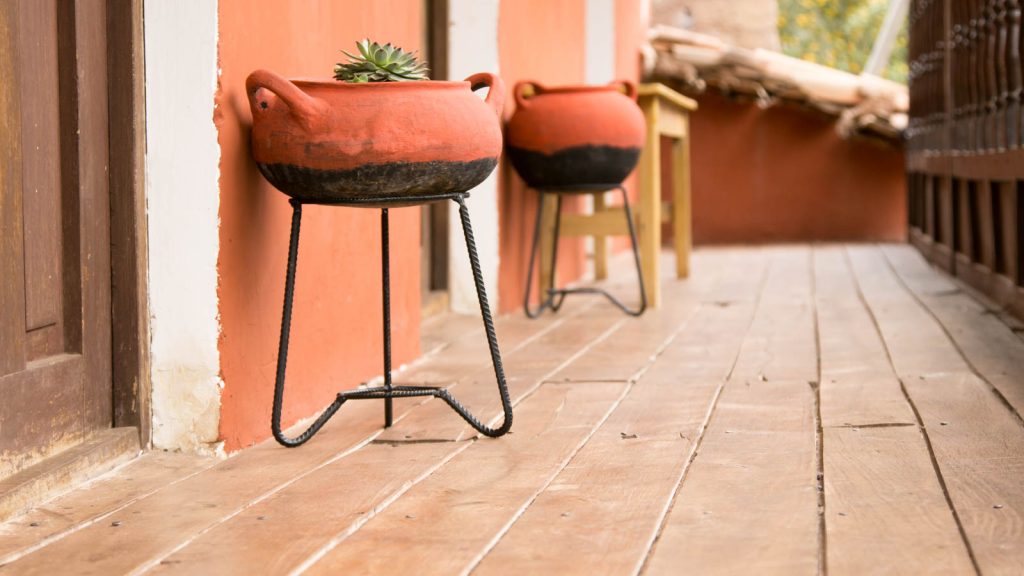 These pots are on our upper deck outside our bedroom doors, each contains a cactus. I’ve already tripped over one and broken it. 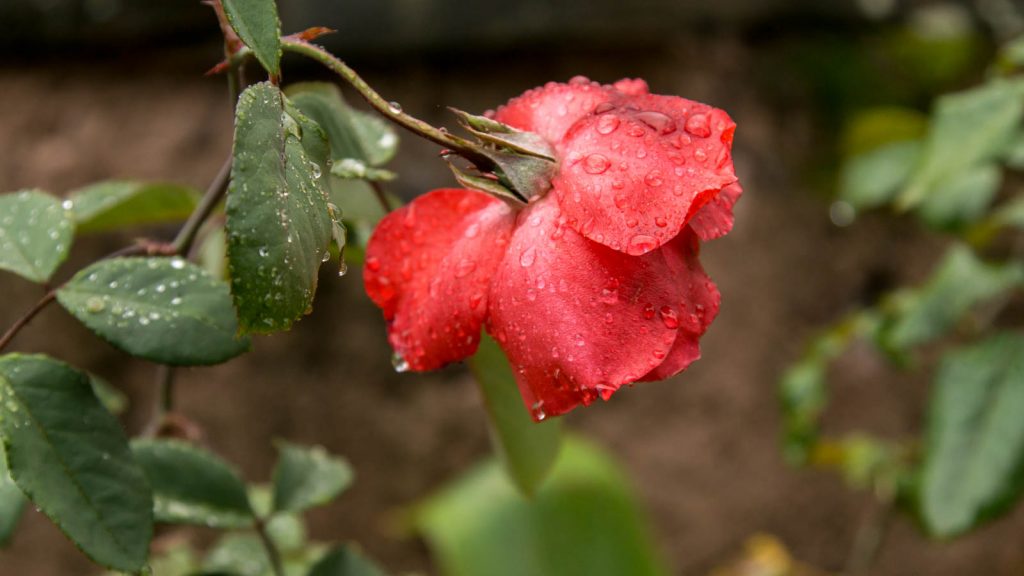 A rose in their garden glistening with the recently fallen rain. 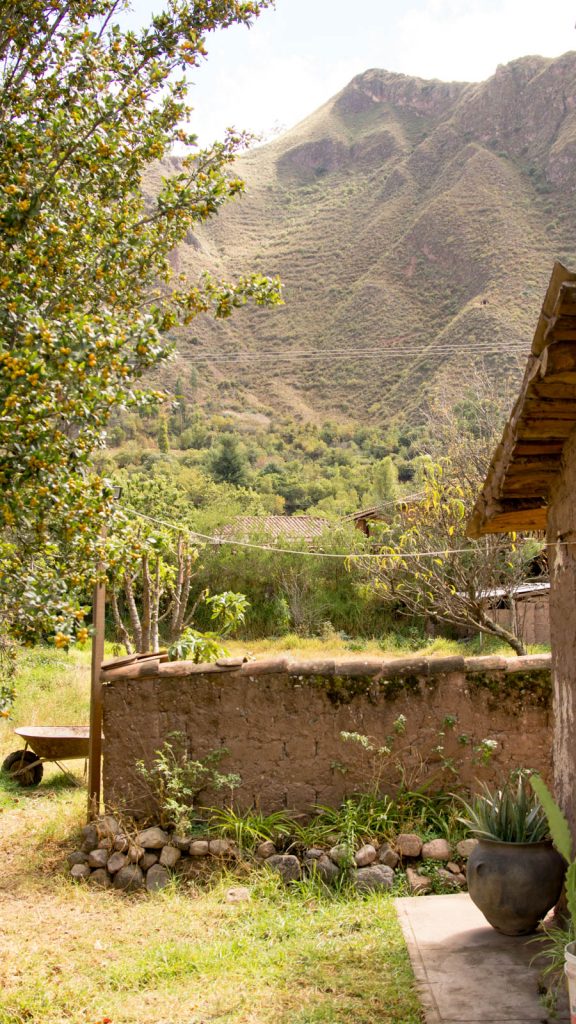 Taken around the side of our house where the bathroom is. 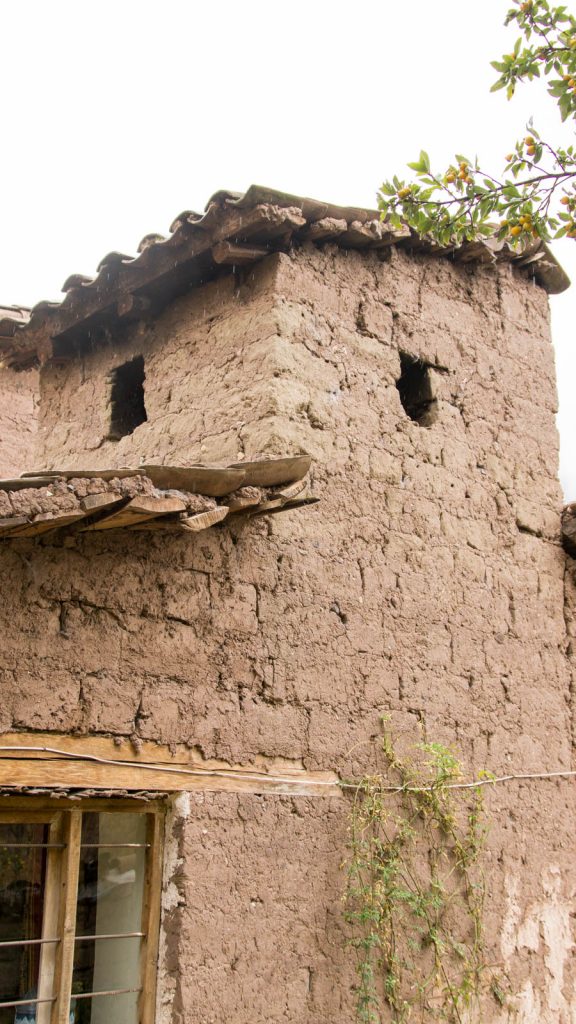 We have no idea how old this house actually is, but it’s held together with mud, clay and grass. 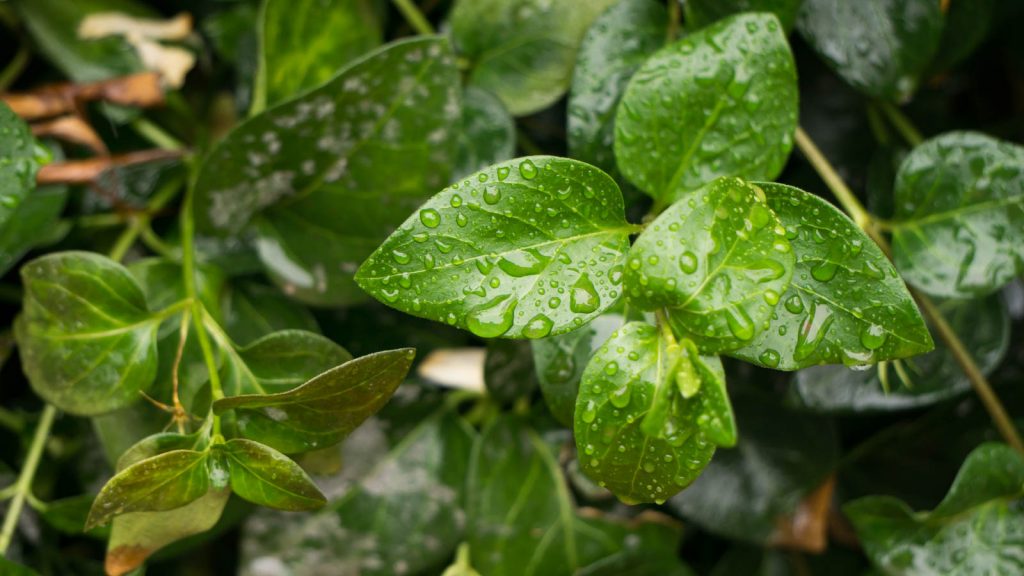 Loved this so wanted to include it. Makes me feel hopeful. 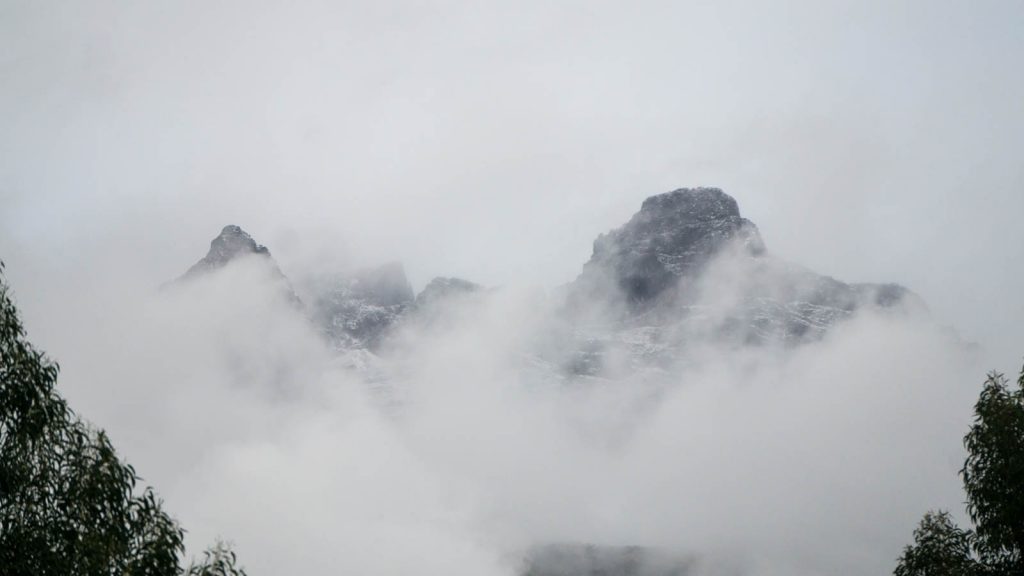 View from our balcony as the fog is starting to lift.

Things are really clearing up, now! 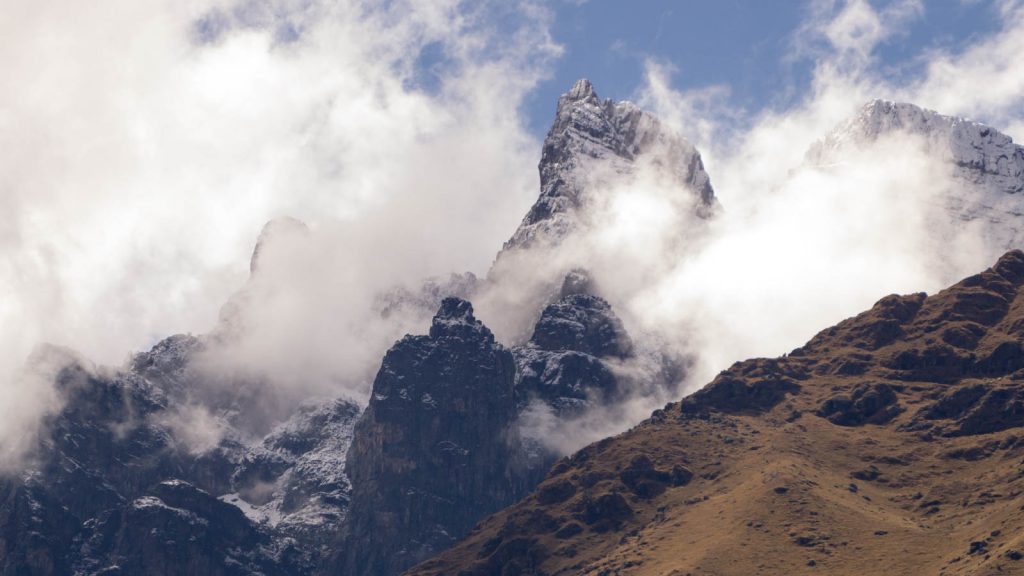 Begging to be climbed!!! 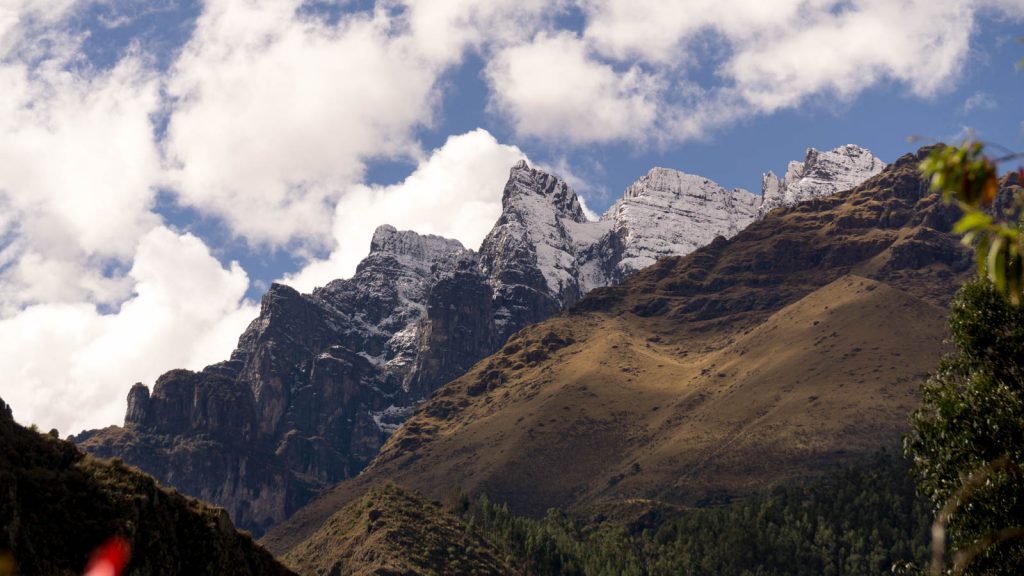 Ahhhh… Temperature goes up a solid 15 degrees when it clears up. 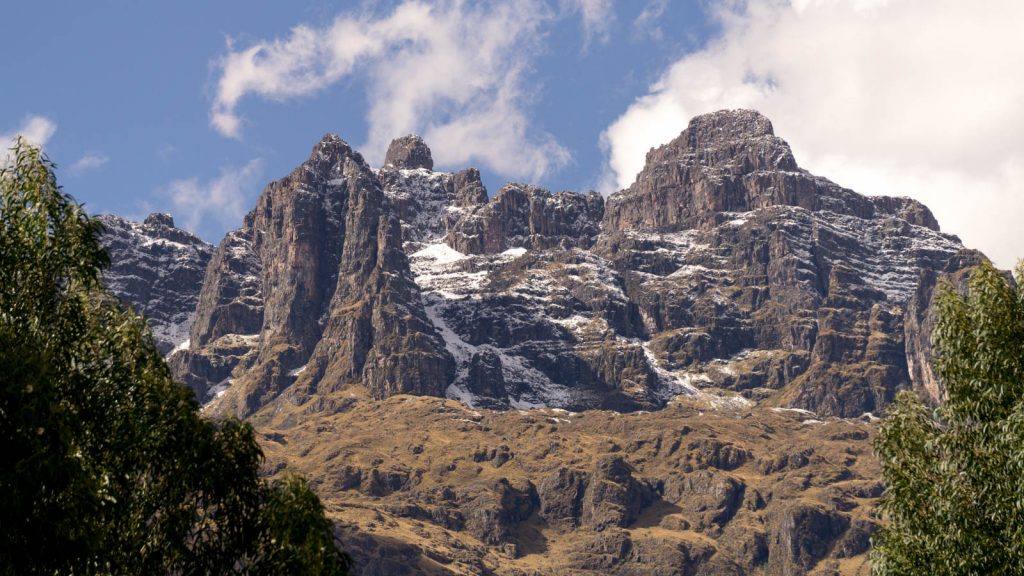 At one point in time this volcano was spewing fiery hot lava that formed its base. 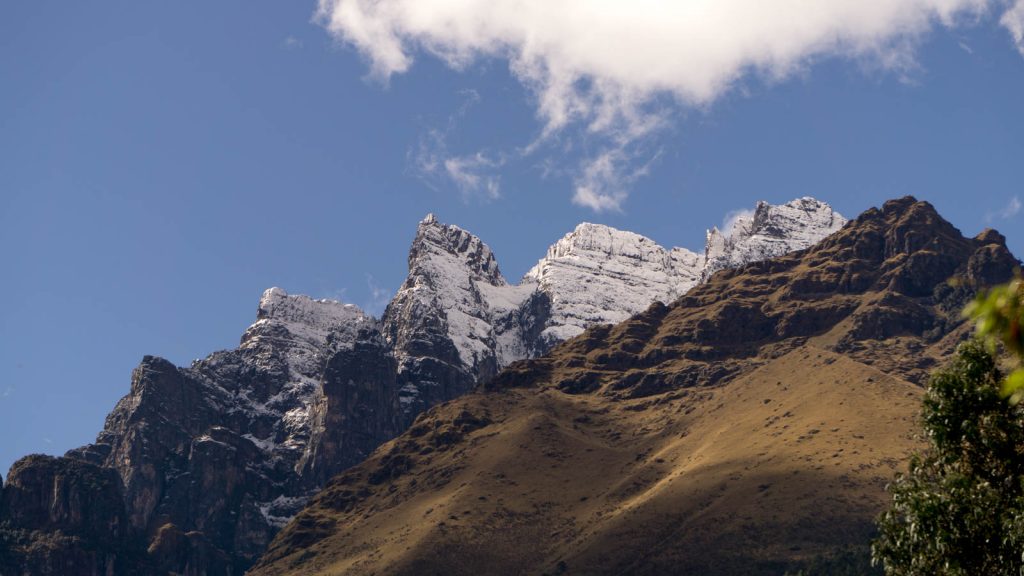 Yes we are obsessed with these peaks. We’ve called them “The Stairway”. 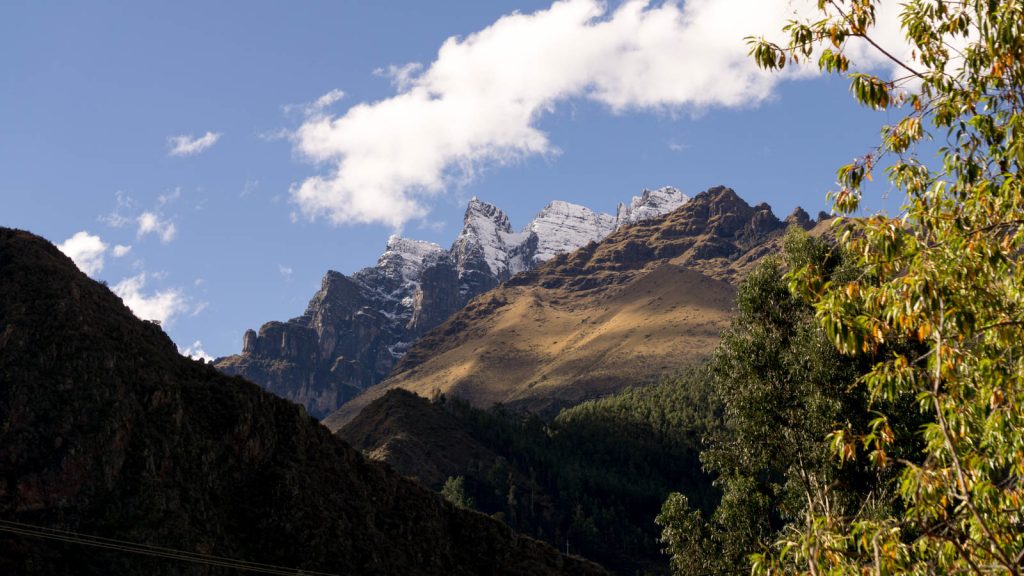 And how it looks from the base of our yard. 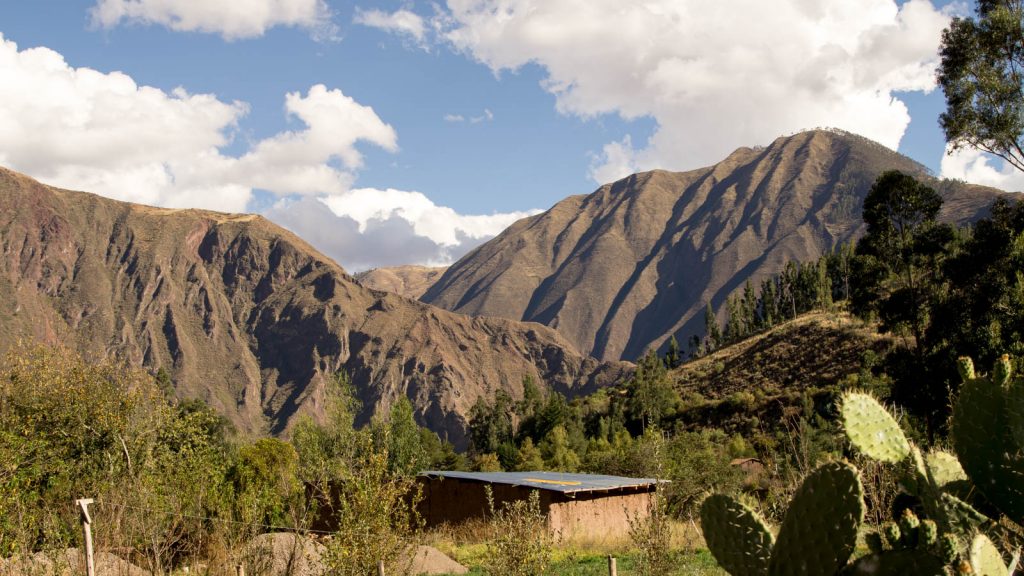 Out the other side of our house. 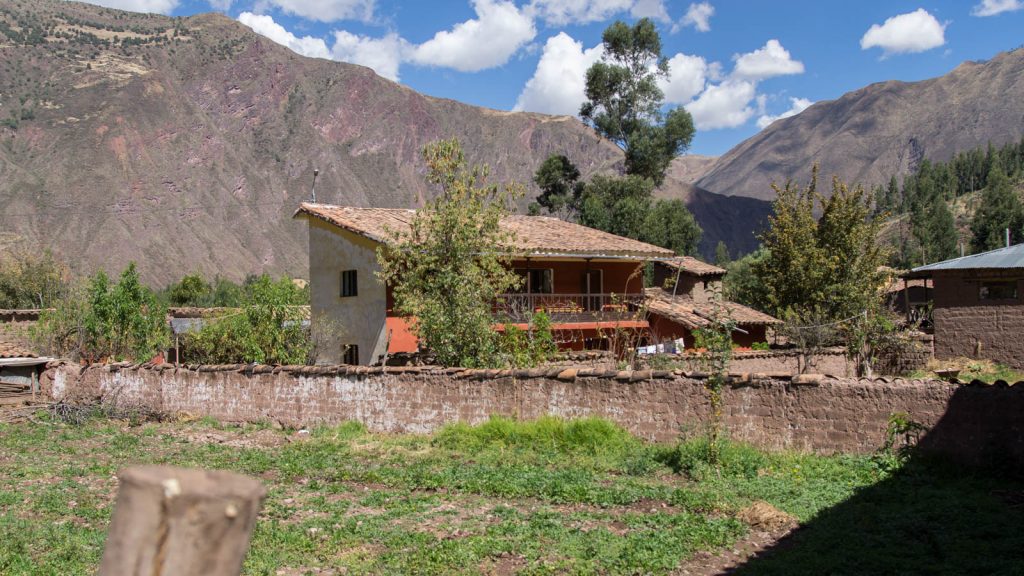 This is our house!

Our wonderful resident chef cooked up a fantastic chicken and rice dish; and with Piper starting to perk up things were beginning to improve. The trick to altitude is drinking a LOT of water and putting in the time. The body must over-compensate for the thinner air with more shallow breathing, and because the air is so dry it is easy peezy to quickly de-hyrdrate. We all hit the sack early praying for a day with better weather, fresh attitudes and the opportunity to begin a new mini-life, here in the Sacred Valley. 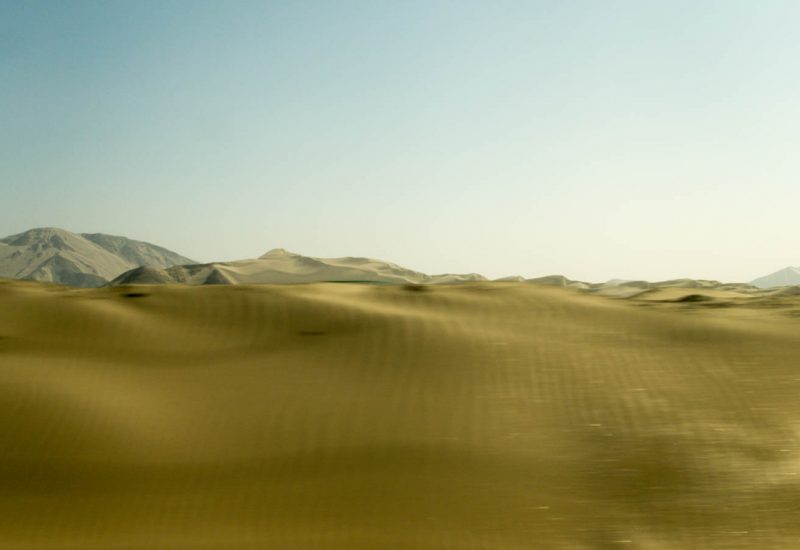 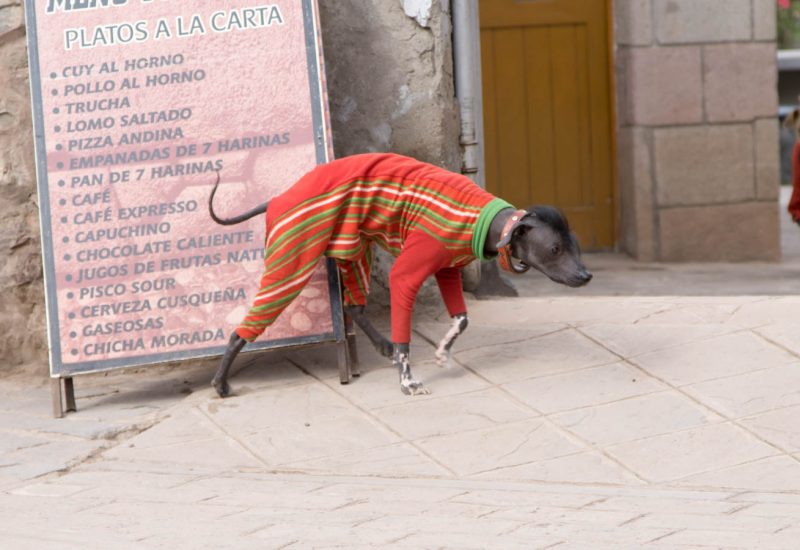 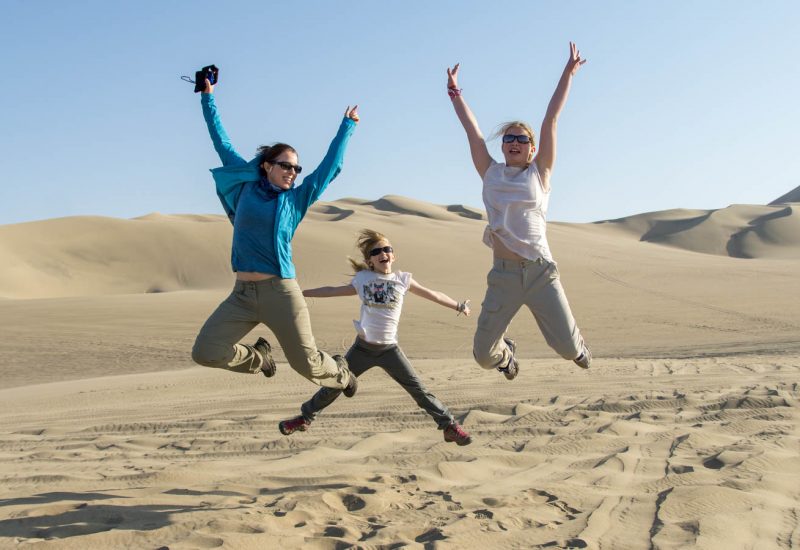