We started off with the best of intentions… wake up at 6:00 am, head to the Meditation and Yoga scheduled for 7:00 am and begin our day with total zen. Ummm, yeah, right. Alarm went off at 6 and yours truly proceeded to hit snooze every 10 minutes for 2.5 hours.

Ah well… bad habits are hard to die! Piper and I had booked ourselves in for a mani/pedi combo at $22/each for 10:00am. I’m pretty sure nobody has touched these paws in months so Carmen had her work cut out for her. It was so lovely to just hang and bond with Piper.

Alvi and Saffy met up with us where he informed me he was having a massage and a day of NOTHING. I was like, “fill your boots, dude!” And so, he did. 75 minute massage for his weary bones, beer, mocking the family, his usual schtick. The rest of our day was spent hanging around this heavenly hostel, where the girls played chess against each other, I played with the owner’s dog, Ami, and eventually went online to make plans for the next leg of our trip. In around 3:30pm the girls got restless and decided to take a dip in the ice-cold pool. Here they are embracing it in all its glory: 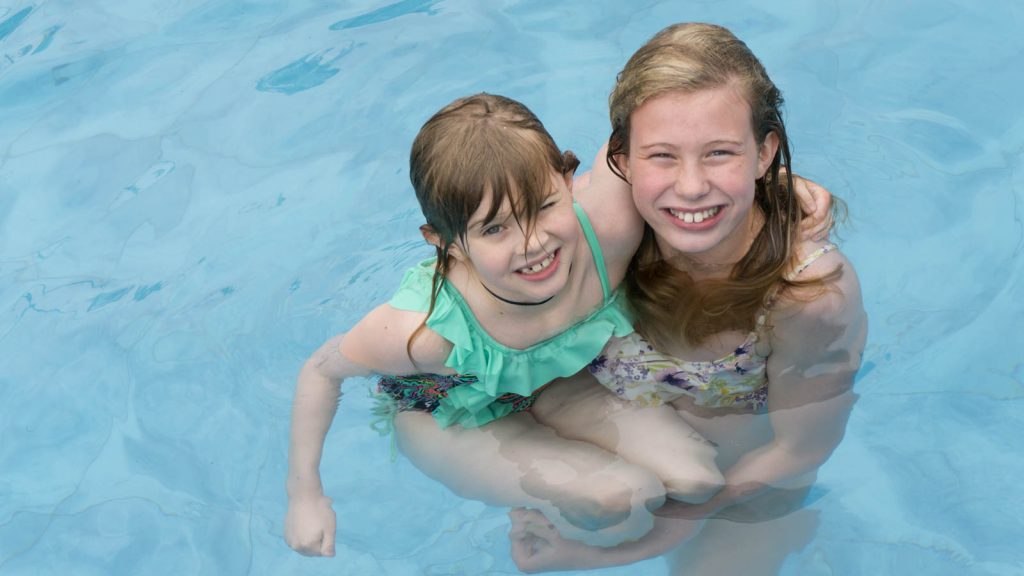 The water was frigid and it was a cool 16 degree day. And yet they went! 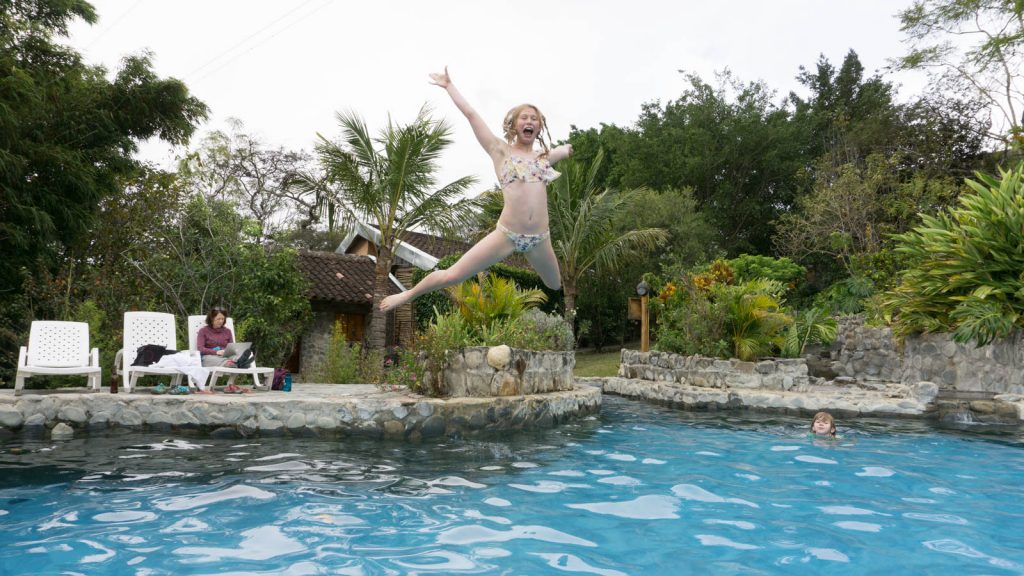 My white girl. You can see me toiling in the background bundled up in a sweater. 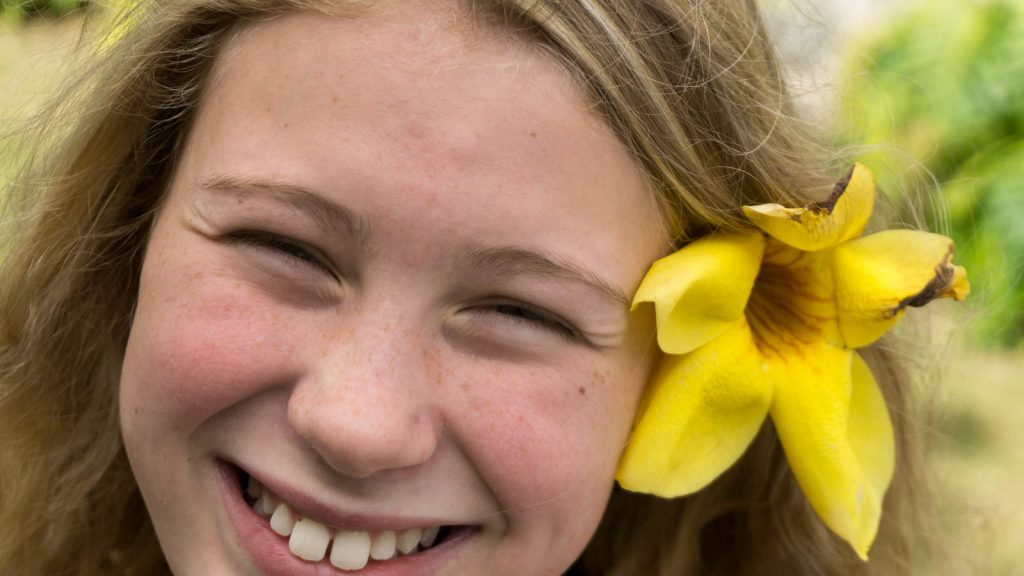 This girl is too much. 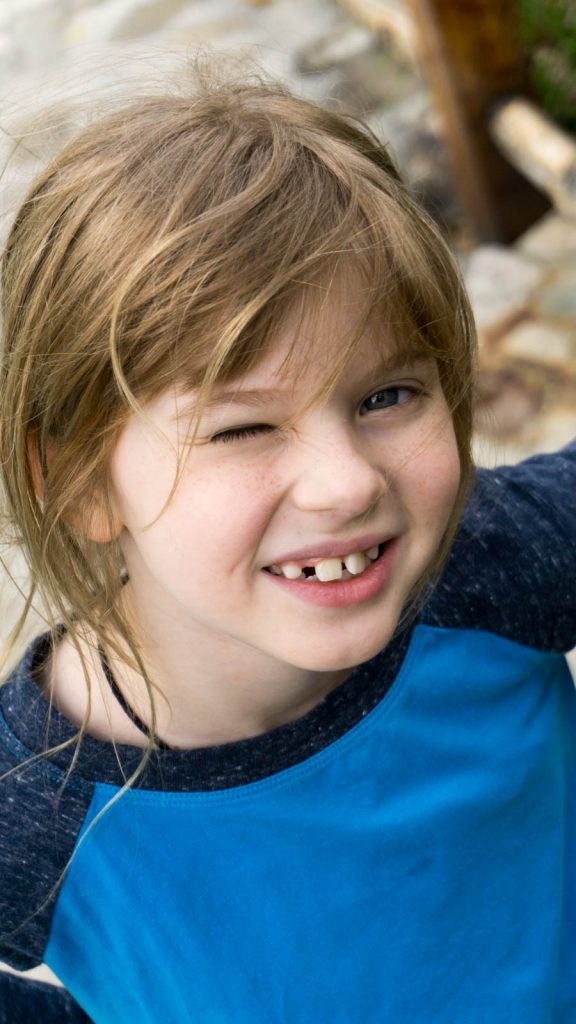 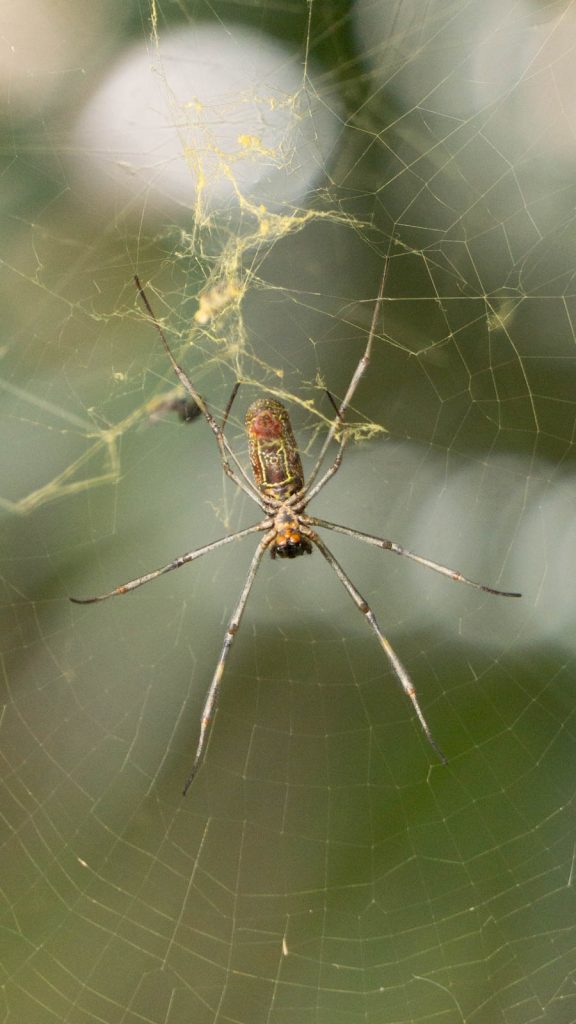 Tiny little spider. (Alvi also found one like this in the shirt he put on today!)

Later in the evening we went to Vilcabamba town for dinner and a walk-about. Following the usual arguing over what the kids would eat, our meals arrived and once again, here in Ecuador everything is super-sized. From the flora and fauna (see spider above) to the portions of food! As Piper was about to dig into her chicken — which was the last meal to arrive — she had a wee bit of an accident and ba-da-boom-ba-da-bing she was wearing her entire dinner, a lovely compliment to her new Iviva shirt. Waterworks ensued! Tears galore! Rice was everywhere! The street dogs came a-sniffing!! Ahh it was a sorry sight. Piper does NOT like getting dirty and was especially concerned that the grease from her chicken would ruin her sacred shirt. I kicked it into super-patient-mom high gear, had her dump all her food on the floor to the glory of the dogs, dragged her to the Baño, gave her the shirt off my back and proceeded to soak it in tap water. Even after all this effort, she refused to eat and was still bawling at a neighbouring table, face in hands and just uëber distraught. My poor, hormonal kidlet. Eventually, she realized life was not over, that we could properly clean said shirt and Saffy was able to get a bite of chicken into her (she literally fed her sister). Also, for $.65 at the tienda next door, we bought this strange white powdery stuff called laundry detergent (I introduced it to Piper later in the room).  ¡Ay, caramba! 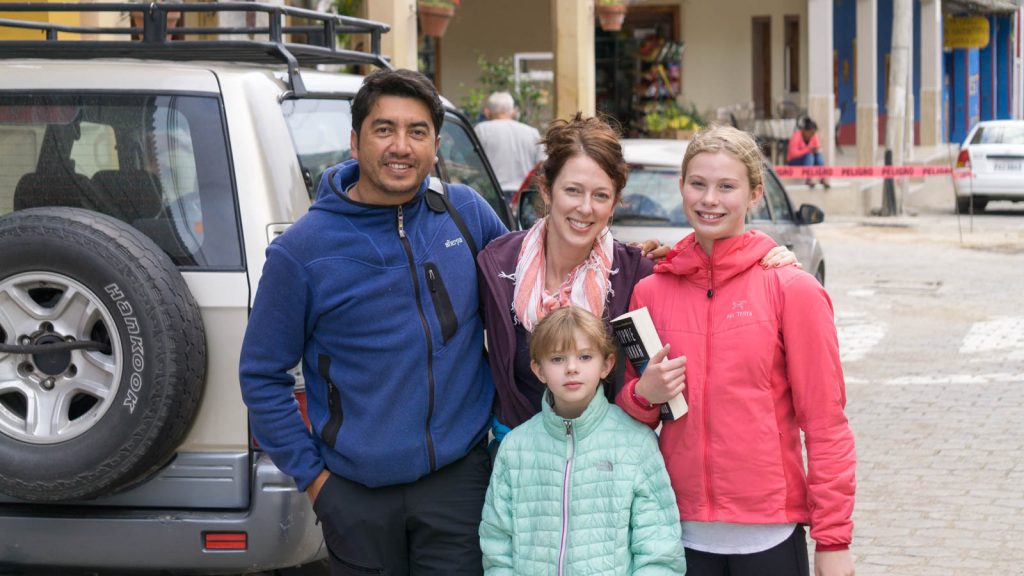 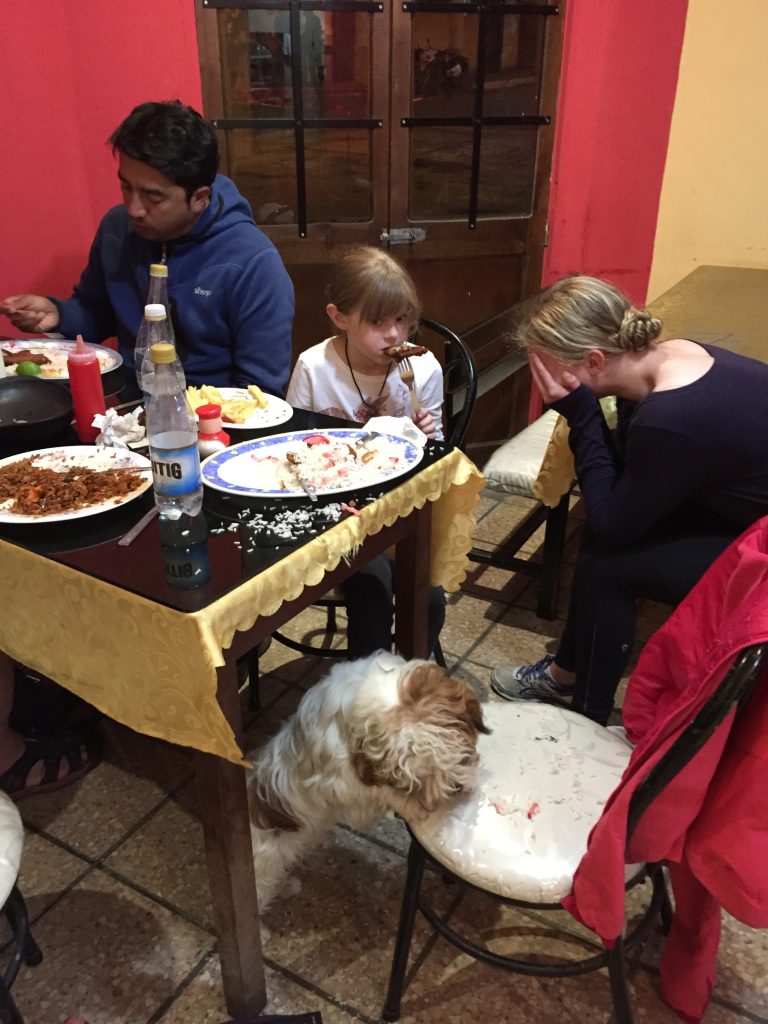 This photo is legit. By now the other dog had taken off with most of her chicken. Saffy was trying to feed Piper hers. Piper was wearing my shirt. Joaquin was like, “I see nothing here, totally normal” lol.

All in all, it’s been pretty awesome to literally do nothing. We are checking out tomorrow and heading to Cuenca… a 4-5 hour drive North and higher altitude at 8,400ft or 2,560M. Peace, y’all! 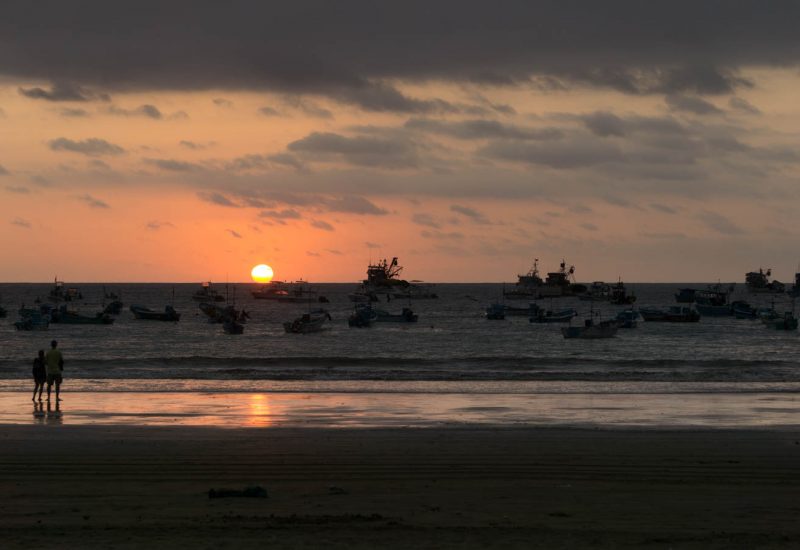 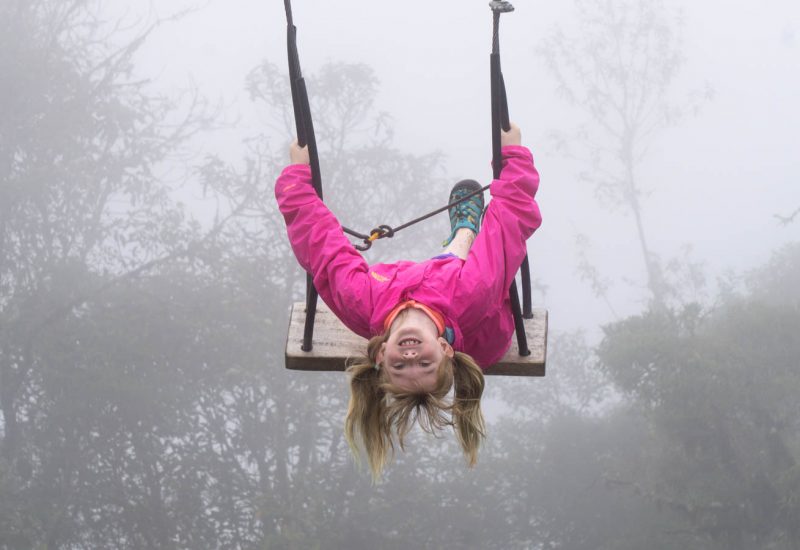 Day 17 (aka When You Channel Your Inner Child) 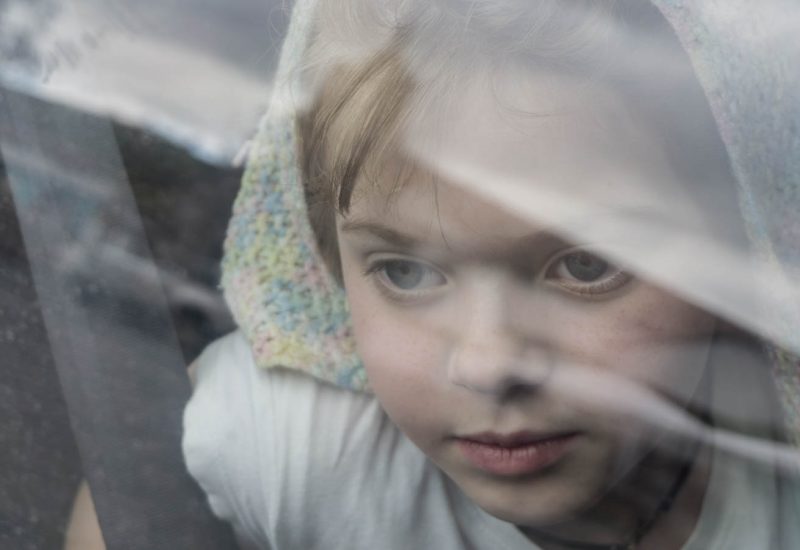